On Wednesday, September 23, 2015 at 4 p.m. at the “Long Way to the Top: Hard Rock in Orlando, 1972-1985” exhibit on display at the Orange County Regional History Museum, Orlando City Commissioner Robert F. Stuart, on behalf of the City of Orlando City Council proclaimed it “Bee Jay Recording Studios Day.”

Whereas, Bee Jay Recording Studios opened its doors in Orlando in 1967, founded by Rollins College Graduate Eric T. Schabacker, and

Whereas, Mr. Schabacker served as president of Bee Jay Recording Stuios until its sale in 1985, and

Whereas, during that time Bee Jay recorded and mixed gold and platinum albums for some of the greatest names in rock music including heavy metal artists Molly Hatchet and Judas Priest along with Christian music artists The Blackwood Brothers, and

Whereas, throughout its history, Schabacker made sure Bee Jay was outfitted with cutting-edge recording equipment as well as a work environment that stressed quality and professionalism while embracing a familial atmosphere that supported the growth of its personnel and artists, and

Whereas, Schabacker, working with FM 107 WORJ, offered the studios to allow for the broadcast of live performances throughout the Southeast, and

Whereas, Bee Jay Studios legacy is being highlighted right here at the Orange County Regional History Center through an exhibit entitled “Long Way to the Top: Hard Rock in Orlando, 1972-1985,” and,

Whereas, the impact of Bee Jay’s legacy is still being felt today, and forevermore, people around the world will continue enjoying classic musical recordings made right here in Orlando,

Now, therefore, I Robert F. Stuart, on behalf of our Council and the residents of our City, do hereby declare September 23, 2015 “Bee Jay Recording Studios Day” in the City of Orlando as an expression of gratitude to Mr. Eric Schabacker and his staff for paving the way for future growth of the cultural arts community.

IN WITNESS WHEREOF, I have herunto set my hand and caused the Seal of the City of Orlando to be affixed this 23rd day of September, 2015. 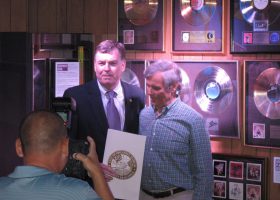 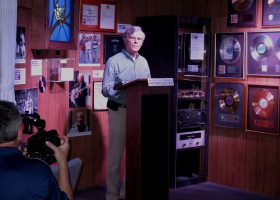