On Friday,  August 13, 2004 Southwest Library was damaged as Hurricane Charley slammed through the Orlando area. I was one of the librarians at Southwest and happened to be the first to arrive for work the following Saturday morning. As I parked my car, I noticed many tree branches and leaves strewn about the parking lot, but nothing else. Therefore, I was utterly shocked when I walked into the main area of the library.  The library’s roof had been blown off! We later learned it was the very top flat area of the roof  (which explained why I had not noticed the damage from the outside,since this part of the roof is not readily visible).  This resulted in extensive water damage to the ceiling and interior.  Many books, magazines, computers and furniture were destroyed. The related photos of the damage speak a thousand words. The library was closed for nearly a month.  During this time service contractors, library administration and Southwest staff worked out to get the place back in shape.  On September 10 Southwest reopened to the public.  Southwest Library was back! 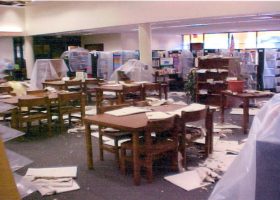 The Damage Inside
Since the very top of the roof blew off during Hurricane Charley, the central area of the library received the most damage.... 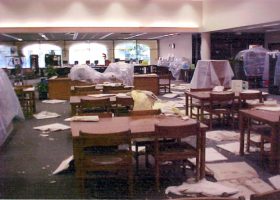 What a Mess!
Another view of the damage found inside the library.  Dust, tiles and insulation from the ceiling were strewn about. Puddles of water... 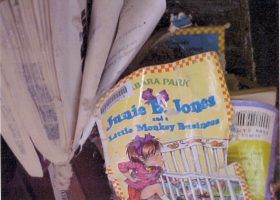 Damaged Books Close-Up
Water and books do not mix.  A close-up view of water-damaged books. 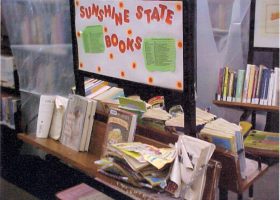 Damaged Books
A children's display is now a collection of muck and water-damaged books. 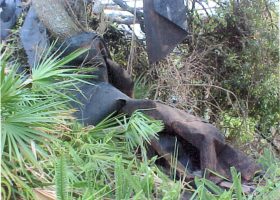