Photo of a company dinner with attorneys and bankers at the Country Club of Orlando. Jerry Kinsley, builder, is seated third from right, followed by his wife Elizabeth Kinsley. Bill Spivey, steel contractor, is seated at the head of the table with his wife, Bea Spivey, seated to his left. 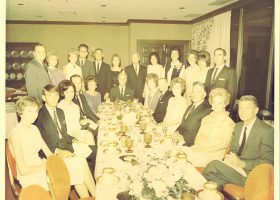 Bill Spivey
Photo of a company dinner with attorneys and bankers at the Country Club of Orlando. Jerry Kinsley, builder, is seated third from...
WWII Veteran Jerry Kinsley Interview Part I