In July 1996 WDBO Radio sponsored a Disney Memories Contest in conjunction with the 25th Anniversary of the opening of Walt Disney World’s Magic Kingdom. My entry won and my family received four annual passes. This is the letter to WDBO recounting my favorite Disney memory. 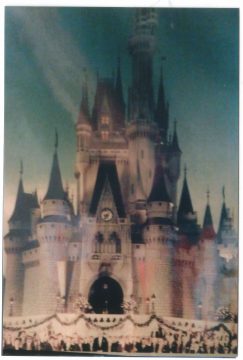 Yesterday I was listening to WDBO and heard an advertisement for a contest which I think said you should send in a memory of Disney that changed your life. I hope I heard correctly. Here’s my Disney Memory.

My “love affair” with Walt Disney and the magic he created began early on in my life. I remember seeing the movie “Cinderella” when it was first released, along with “Snow White,” “Pinocchio,” “Bambi,” and every other Disney film which was released after my birth in 1954. I remember Sunday evenings, sitting with great anticipation in front of the television set, waiting for the “Wonderful World of Disney” to begin with the touch of Tinkerbell’s magic wand and the sprinkling of her magic pixie dust. And when finally we got a color television for Christmas in 1966, the magic of Disney truly came to life in my living room!

I can still remember the excitement and hullabaloo created when it was finally made known that Walt Disney had been purchasing land in a swampy area west of Orlando. I remember going to some place out in the sticks, now known as Lake Buena Vista, and traveling down a muddy dirt road to a preview center, where I viewed a miniature of what the Magic Kingdom would look like when completed.

I remember the unbelievable excitement when the days finally drew near for the opening of the Magic Kingdom. It was October 1971, and I was just 16 years old. I wanted oh so badly to be one of the first to walk through those gates, but my parents thought the crowds would be too great and the prices too much (the 8 adventure booklet was around $10 at the time). I thought I would be destined to see this wonderland on television only – at least until I could talk my parents into letting me drive there myself.

But then something unexpected and wonderful happened. My boyfriend was working as an audio man at Channel 24, which was located in the Mid-Florida Tech building on Oakridge Road at the time. PBS production personnel were in town to tape the World Symphony Orchestra conducted by Arthur Fiedler, which was scheduled to perform in front of Cinderella’s castle as part of the grand opening ceremonies at the Magic Kingdom. They were at Channel 24 using the facilities for some last minute details, and my boyfriend happened to be one of the people who was chosen to help them. One of the PBS production people, as a gesture to thank him for his help, gave him two tickets to the performance. I couldn’t believe it! We were going to the grand opening gala performance! It was a formal affair – tuxedos required. Many dignitaries and Hollywood celebrities were invited. My dream was coming true!

You can imagine my excitement! Here I was an average looking 16-year-old kid, from an average family, from a very average little town receiving an invitation to attend this gala affair. I truly felt like I was living the story of Cinderella. My mother – not my fairy godmother – had an evening gown altered for me, bought me rhinestone earrings and a necklace and formal length white gloves, and had her hair dresser do my hair. My boyfriend rented a tux and spruced up his old green Ford Tempest to make the trip from Eustis to the Magic Kingdom. The anticipation that night as we drove in his “pumpkin” was unbelievable. I thought I would burst!

As we drove through the gates and showed the host our invitations, I was sure they would take one look at his car and question how we got them, but they didn’t. We were directed to VIP parking and proceeded to the park. We were escorted through the turnstiles and taken to a waiting monorail – the excitement was building by the second! It was so hard to look cool and calm when inside I was ready to explode! The sun had already set and as we traveled toward the Magic Kingdom, the lights of Main Street and Cinderella’s castle became visible and twinkled like the stars in the sky.

When we exited the monorail and were directed to Main Street. I was shocked to see that the street was empty – tourists behind ropes standing on the sidewalks watching as guests walked down the middle of the street. I was scared to death! Here I was, a very average 16 year old Georgia girl with my very average boyfriend, walking down the middle of Main Street with people trying to guess who we were. I overheard one teen girl saying loudly that she recognized my boyfriend from a television show, and then calling to him. I became very self-conscious very quickly, but thought this must be how Cinderella felt as she approached the ball and walked up the castle staircase, knowing full well that she would return to her true status when the clock tolled midnight. 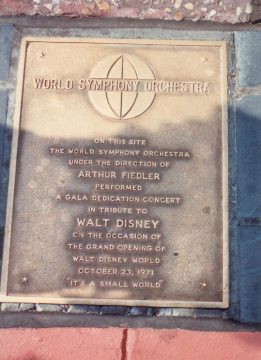 We were a little early, so after we were escorted to our seats in the courtyard of Cinderella’s castle, we watched as the “stars” arrived. Taking seats directly in front of us were Agnes Moorehead and Caesar Romero. To the left, further down the row was Fess Parker (Daniel Boone) who made a dramatic entrance with a top hat, cape and cane. More and more dignitaries from sports, politics, and Hollywood took their seats around us. I tried so hard to look like I belonged. I don’t remember much of the concert, just that it was wonderful! When it was finally over, we were escorted to the Crystal Palace for Champaign and to mingle with the other VIPs and celebrities. We actually met and spoke with Arthur Fiedler, whom I admired greatly. Knowing that I was only 16, but not wanting anyone else to realize that kids had been invited to the celebration, I took the Champaign they offered, but poured it into a potted palm. I still have the Champaign glass they gave us that magical night – and I still have the boyfriend.

As the night drew to a close, we walked down Main Street toward the exit which was now empty of tourists. We glided through the turnstiles, our heads still in the stars, and headed for our “coach” in the parking lot. As we drove away, our “coach” returned to it’s “pumpkin” status, but the magic of that night remained.

My boyfriend and I married on February 14, 1973. We spent part of our honeymoon at the Magic Kingdom and returned every chance we could. Our son Christopher was born in 1982 and our daughter Ashley in 1984, and they too have been touched by the imagination of Walt Disney. The magic and excitement I experienced that October night in 1971, has remained with me these past 25 years (as of 1996). It is relived each and every time I pass through the turnstiles, walk down Main Street, and gaze up at the spires of Cinderella’s castle glistening in the bright Florida sunshine or sparkling in the myriad lights on and around it. For a brief magical moment, I am once again that 16 year old girl on my way to the ball. 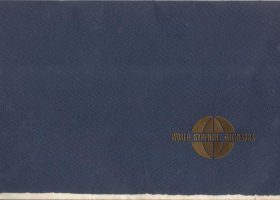 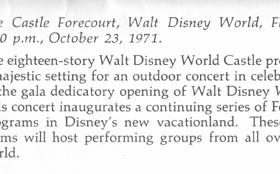 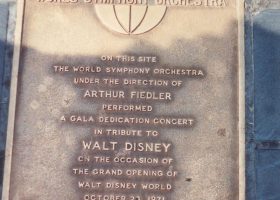 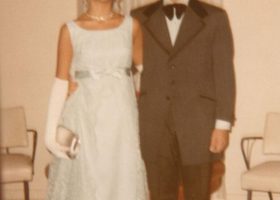 World Symphony Orchestra
On 23 October 1971, my then boyfriend (Oliver Peters) and I (Kim Fischer) posed for a photo before heading off to the... 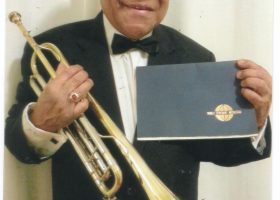 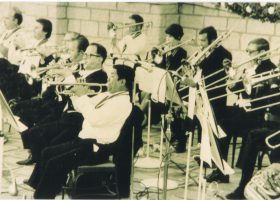 Tomas Oliva Medina - Trumpet
This is a photograph of the World Symphony Orchestra conducted by Arthur Fiedler performing in front of Cinderella's Castle at Walt Disney... 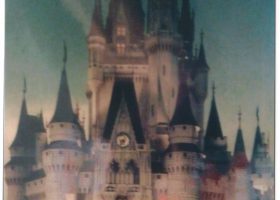 Disney 22Oct19713.pdf
It's Downbeat of World for Disney

Orlando Sentinel feature in the After Hours section about Arthur Fiedler and the World Symphony Orchestra performing at the opening ceremonies of Walt Disney World Magic Kingdom.

Article in the Orlando Sentinel on 24 October 1971 about the performance of the World Symphony Orchestra. Includes photos of celebrities who came for the performance and the castle with the orchestra and guests.   Included on pages 1A and 18A are photos of arriving celebrities: Jonathan Winters, Fred MacMurray, Arthur Fiedler, Annette Funicello, Greg Morris, Rock Hudson, Robert Stack and Winter Park's own Alphonse Carlo.

Also included in the newspaper are articles about the 40,000 visitors who jammed the park on the opening day.

Front page of the Orlando Sentinel

Continuation of front page articles in the Orlando Sentinel on 24 October 1971 about the performance of the World Symphony Orchestra and opening day crowds.

The articles took the entire front page so this is split in two images.
This is the image of the bottom portion of the newspaper.

Continuation of front page articles in the Orlando Sentinel on 24 October 1971 about the performance of the World Symphony Orchestra and opening day crowds. Included on pages 1A and 18A are photos of arriving celebrities: Jonathan Winters, Fred MacMurray, Arthur Fiedler, Annette Funicello, Greg Morris, Rock Hudson, Robert Stack and Winter Park's own Alphonse Carlo.

The articles took the entire front page so this is split in two images.
This is the image of the bottom portion of the newspaper.

Continuation of front page articles in the Orlando Sentinel on 24 October 1971 about the performance of the World Symphony Orchestra and opening day crowds.

The articles took the entire front page so this is split in two images.
This is the image of the top portion of the newspaper.

Continuation of front page articles in the Orlando Sentinel on 24 October 1971 about the performance of the World Symphony Orchestra and opening day crowds.  Included on pages 1A and 18A are photos of arriving celebrities: Jonathan Winters, Fred MacMurray, Arthur Fiedler, Annette Funicello, Greg Morris, Rock Hudson, Robert Stack and Winter Park's own Alphonse Carlo.

The articles took the entire front page so this is split in two images.
This is the image of the top portion of the newspaper.

Two articles about the performance of the World Symphony Orchestra in the forecourt of Cinderella's Castle published in the Orlando Sentinel on 24 October 1971. The first concentrates on the celebrities who came to the performance. Not mentioned were two young people (Kim Marie Fischer and Oliver Peters)  who happened to get invitations from PBS execs in town to record the event.

The articles are compiled here into one document.