• Earth Globe
o The show’s video segment, which is displayed on the “Earth Globe” located in the center of the World Showcase Lagoon, features 56 famous faces and covers 5 continents (screens).
o The globe weighs 350,000 pounds (equivalent to the weight of 150 midsize cars).
o The main structure of each petal consists of 4 inches of thick steel plate.
o The hydraulic system is capable of producing 650,000 pounds of force.

The photos linked to this topic are taken from home video showing the transport of the Earth Globe barge from Disney’s North Service Area (NSA) to the Epcot Marina – a two night event in June 1999.

The first photo is of the Earth Globe barge (sans Earth) passing the Disney Car Care Center on its way to Epcot. The main barge was assembled at Disney’s North Service Area and the Earth structure added after being moved to the Epcot Marina.
The second photo shows the special multi-axle truck needed to move the barge due to its weight of nearly 350,000 pounds. 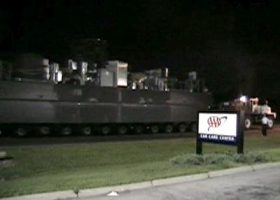 Reflections of Earth - Earth Barge
Earth Globe from http://www.wdwmagic.com/Attractions/Reflections-of-Earth.htm The show's video segment, which is displayed on the "Earth Globe" locat... 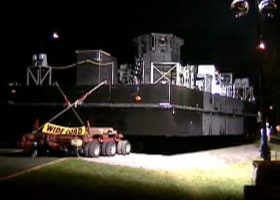