There is not much information to be found on the Ku Klux Klan members that tormented Catholics and Blacks in Central Florida in the 1920s but some disturbing mentions have been found in local newspapers and church histories. 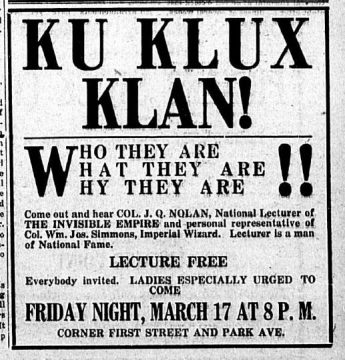 These excerpts from Edward Hayes’ 1985 work “The Good News of St. James Cathedral: A Short History of the First 100 Years of a Catholic Parish,” make it clear that these were men who resided in the Orlando community:

“Also during the awakening years of the century, the Ku Klux Klan spread its animostiy in Central Florida, and while evidence shows blacks as their primary target, Catholics, too, suffered in one way or another at their hands.

Hooded Klansmen seemed to take fiendish and puerile delight in marching up and down Orlando’s principal streets at night. No one is so naive or foolish as to dismiss their frequent parades outside St. James Church as mere coincidence when Father Fox was inside conducting a novena or leading Benediction of the Blessed Sacrament. Evening mission services, too, were occasion for the Klan’s appearance.

Aside from the chilling atmosphere and physical hurt delivered by the KKK, the picture had its grudgingly humorous side. One of its members, a well-known Orlandoan whose name shall be withheld from this account, was easily identified – despite his hood – because of his peculiar walk. People on the sidewalks outside St. James would tauntingly call out to him by name as he paraded by.”

In other excerpts about Father John Bishop, Pastor of St. James from 1933-1957, Hayes states:

“A Man of average size and medium build, he’s remembered by one of today’s parishioners as ‘a rambunctious, pugnacious Irishman’, a thumbnail description the priest would own up to with a two-fisted stance early in his pastorate against the Ku Klux Klan.”

Andy Serros, a nearly lifelong parishioner of St. James relayed this story to Edward Hayes and it is included in his work:

[On] a long-age Saturday night when he was barely a teenager… he and two black men were helping his father – owner and operator of Serros’ Seafood and Poultry Market on Court Street – clean up the store. “Dad got a telephone call and went to the safe where he kept a gun,” Serros said. “He told me to finish cleaning up and close the store.”

Instead, the boy’s curiosity taking command, he followed his father over to Orange Avenue and up toward the old St. James rectory a few blocks away where a pack of Ku Klux Klansmen were taunting the pastor. Hiding at a house where the Gibbs-Louis store now stands, the wide-eyed boy watched the drama unfold.

The pastor might’ve been deathly afraid – only he and God knew – but he stood on the doorstep with his fallible shoulders squared and his small fists taut. He reckoned aloud that the gang might easily do him in, but he threw out a resonant challenge: “I’ll take all of you on one at a time!”

At that, the KKK leader let out a laugh, and told his fellow marauders: “Maybe we should leave him alone.”

Apparently they agreed because they moved on. Some two decades later, outside the Chamber of Commerce, that same KKK leader, minus his robe, his face in open admiration, was now offering the St. James pastor congratulations for winning the “Good Citizenship Award”. 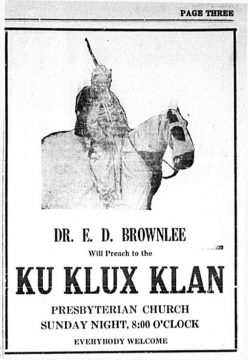 Advertisements appearing in the 1922 Sanford Daily Herald bring chills to the reader, especially when you read the local Presbyterian church was host to discussions about the KKK. The images here were published on March 29th and 30th 1922 to promote the event on April 2nd. 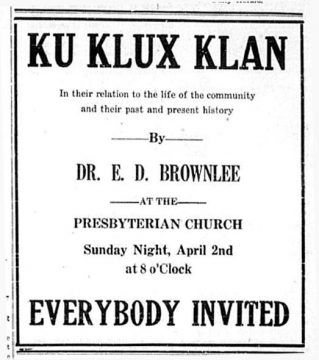 A short notice in the Personals section of the paper on Monday, April 3rd, describes the turnout. It is thought that the sermon was in support of the organization, however, there is nothing in the newspaper advertisements or this article that states this. 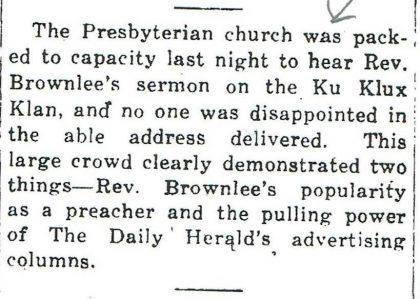 Martha Higgins Wight records several memories about the Ku Klux Klan in Sanford in her family history book, “The Higgins Tales,” written by Martha at the age of 76 in 2001. She mentions the fire on January 25, 1932 that started at 4:30 a.m. destroying the original wooden All Souls Catholic Church constructed in 1887, along with the rectory built for the parish’s first resident pastor Father Patrick J. “P.J.” Bresnahan in early 1911.

On page 25 in her book she makes a tongue in cheek comment: “How the church fire got started was never solved. Surely it must have been coincidental that it paralleled a time when the Ku Klux Klan was active in Central Florida.”

On page 118, Martha recounts her memory of a Klan Parade:
“One night after I had gone to bed, I heard a rumbling noise and saw shadows from car lights reflecting on the bedroom walls. I looked down from the window and saw a caravan of many cars, mostly Model A Fords and pickup trucks, slithering up Sanford Avenue toward town. There was just enough light from the car lights for me to see some ghost-like figures inside the vehicles, and I noticed that all of the license plates were covered over.

The next day I overheard some grown folks talking about it and learned that it was a Ku Klux Klan parade. They had snaked their way through Goldsboro and Georgetown, the black communities of Sanford, and ended up downtown on the old air strip on the lakefront. There were hundreds of figures draped in long, white robes and sheet-like masks with holes cut out for eyes. They wore pointed, white headgear … They gathered around a wooden cross that must have been twenty-five feet tall, which had been doused with kerosene and pitch. When it was set on fire, the glow in the sky could be seen for miles around … it happened about the time of the burning of All Souls Catholic Church.”

Peter Schaal, a newspaper man who wrote two books recounting his memories of life in Sanford, indicates in his book Sanford as I Knew It 1912-1935,that the parades likely took place about a decade  earlier: “A 20-car Klan parade, with burning cross and all the trimmings, highlighted the election eve, June 2 [1924]…”

He does not mention the Klan in relation to the church burning down in January 1932, but there could have been other Klan parades that Ms. Higgins is referring to in addition to this one that took place in 1924.

Directory pages are not numbered. Find the correct starting point and number the pages in the directory to correspond with the index.