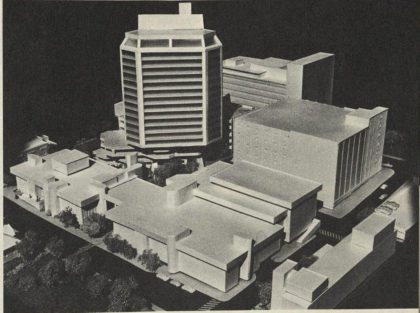 Below  from pages 25-26 in Orlando Central City:

Library Square is a unique city development opportunity. The basic concept which grew out of the expansion requirements of the Public Library and the City’s Parking Commission, is to combine Library, parking and new private development on a two block area overlooking Lake Eola. Much of the land involved is already in public ownership.

The plan shows: The much needed library expansion to the north providing a low rise building for Eola Park; a new parking structure in the “parking corridor” along Magnolia, where parking demand now far exceeds the supply; an office tower with spectacular views, located on a landscaped pedestrian way connecting Eola to other new building projects in the central business district. It is an example of how high density multi-use development can work in the central core, and a prime example of how governments can cooperate. It sets a standard for other projects to follow.

A special committee appointed by the Mayor, which included a City Councilman, a County Commissioner, other city officials and the Library Board, worked together for ten months. They prepared development plans, design guidelines and financing arrangements. This is a project that has continued to look more desirable and more feasible as it moved ahead during the year. It is an excellent illustration of how the Action Plan concept works in practice. 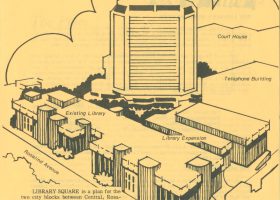 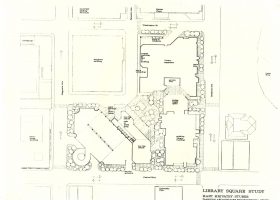 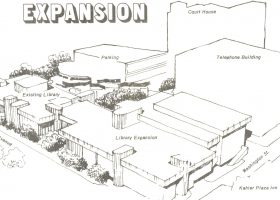 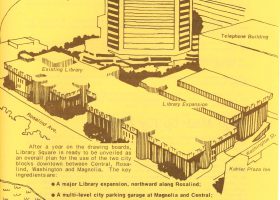 Library Square Pamphlet Cover
After a year on the drawing boards, Library Square is ready to be unveiled as an overall plan for the use the... 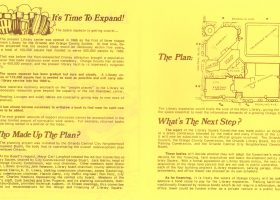 The design for Library Square was part of the Orlando Central City planning that culminated in the publication by the same name.  The two page summary on Library Square includes a photo of the current building, board members with Director Glen Miller, a model of the proposed addition.

"Library Square is a unique city development opportunity. The basic concept which grew out of the expansion requirements of the Public Library and the City's Parking Commission, is to combine Library, parking and new private development on a two block area overlooking Lake Eola. Much of the land involved is already in public ownership...."

From inside front cover:
This is the story of two years in the history of Orlando, Florida.
In 1973 and 1974 a decade of hard work culminated in an active, successful central city rebuilding program. Projects now being set in motion will have profound and positive effect on this city for years to come.
The important story of the past two years, however, goes beyond the projects; it is the story of people working for their community. Today in Central Orlando hundreds of people are working together -- the Mayor, City Councilmen, County Commissioners and officials, city staff, business leaders, merchants, landowners, junior citizens and senior citizens. Together they are carrying out a plan, and together their efforts are beginning to build a new kind of city for Florida.
This is a record of their work.

The extensive list of all the individuals, organizations and agencies involved in Orlando Central City are found on the next to the last page in the document  attached.