My name is Alice Macy Morgan, I’m from Pine Castle, Florida. I’m was actually born in Conway. I was born in my grandmother’s home, but we lived in Pine Castle. Hilda Arnett. I’m named after both grandmothers. They were early settlers. My grandfather was a carpenter and he at one time he worked for I believe it was a Robinson. I believe, downtown they have a Robinson Avenue and they have a lot of cattle and he worked for them. Did you grow up in the Conway area? No, my mother just went over there for my birth. They didn’t go to the hospital back then, they went to mama’s.

It was a small town and you knew everybody that lived there. I cried through the third grade I think everyday I went to school. I didn’t want to go. And I had a cousin and he was in my same class and he took me everyday. Carl Winegard. Winegard down there is named for their family. They were dairy people. We had a lot of dairy people around this section of Orlando. We would get to ride to school, but he would take my hand and take me into class. But then they left when we were in the third grade. They moved to Georgia…

Well, we were lucky, once in a while on Sunday we’d get a ride in the car. You know going for a ride – that was a big deal. You know, you might get a soft drink, too. But it was just an ordinary day….

Miss Hoffner was the first grade teacher in Pine Castle and she taught me and she taught our first three sons and then she retired. She was a really nice teacher. Everybody loved her. We didn’t have the activities that they have today… I ate lunch at school. Part of the time I brought it. Lunches were 10 cents. We had a big cafeteria and we had a big auditorium, too. We had a nice big auditorium. We had a lot of minstrels that they don’t have today. So that was really a lot of fun, too…. We had recess and things they don’t have today… Sports. I loved sports. Basketball. Of course, we had a basketball court at school so we had a nice place for that. Softball, you know, a few things like that. Not like when we were in senior high school. We did it all then. Had a gym class, but I still like sports now… I played City League Softball, too, when I was in Senior High School and my husband’s sister was state champion that year. Best catcher in the state of Florida – Dorothy Morgan. Her married name was Burns.

I didn’t work any until I was in high school. So we had the weekends to do whatever we wanted to do. Always my mother cooked three hot meals a day, every day. Beans and rice. And a lot of beans and rice. It was during The Depression. And she made hot bread every meal. Hot biscuits. She made the biscuits… There were five girls in the family so she worked at home and she made all the clothes and did all her work beside that….

Do you remember any holidays that you celebrated growing up? Easter and Christmas and even at school they celebrated Easter. We’d always have an Easter egg hunt, you know in class. We’d go down to the island there in Pine Castle, that was Oak Island, and have our Easter egg hunts down there. How did you celebrate Easter with your family? We’d go to church. And then we’d probably have another Easter egg hunt and then maybe go to a relative’s house with family and have another Easter egg hunt. Was there a church in Pine Castle where you went? Yes, there was a church in Pine Castle and we were married in that church, Pine Castle Baptist Church. They moved down on the lake and built a bigger church there. But it was there for a long time. Before that they had the Methodist Church. It was a little frame building and everybody used that. You know no matter what denomination you were. And then they built the other Baptist church and that’s where we grew up going.

Secretarial work. I worked for an insurance company, American National. I don’t know if they still have an office here or not. And then I worked for a furniture company for a little while in the office. And then after we were married he was in the Navy and I worked some while he was gone. Then I retired. I went back to work when I was 43 out at Martin and I stayed there for 18 years. I loved it! They came in ’58 and I think it was ’68  when I came out there. They were working on the Pershing Missile at that time and I was on the Pershing Program. And then they had big layoffs and I was laid off in 1975. But I had moved to the Sprint Program by that time. Then they called me back and I went into personnel and had a couple more promotions and I wound up working for Director of Facilities the last years I was there. And then I decided it was time to retire. We retired early and did a lot of traveling. We’ve been to every state….

My mother’s people didn’t live here so we just visited them every so often, you know. But my other grandmother lived here – saw her almost every day. She was real easy going and that’s about all, Grandma Macy. She didn’t have much to say, but she was really special. By the time I could remember her she sat around most of the time…  She lived to be 93. So maybe we all should just sit around a little more on the swing outside the porch….But she lived fairly close to the lake and once in a while we would go by her house on the way to the lake and go swimming and cool off. Then you had the long walk home. Because we walked most every place we went. We didn’t go that far. We grew up in the lakes….

What is it that you enjoy most about our community?

Family. That’s what keeps us here. We spent 18 summers in Waynesville, North Carolina and then we would come here in the wintertime. And I love it up there in the mountains, but the family’s not there. So that’s what keeps you where you are usually is family… 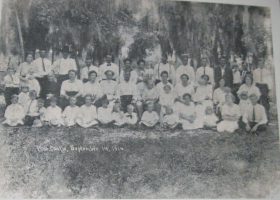