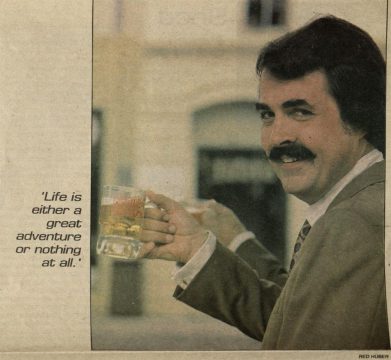 It is impossible to capture everything about the man and his life in a single page, chapter, or even a single book, but  Bob Snow’s   bio page   on  his company web site along with  newspaper and magazine articles from the files at the Orlando Public Library provide a great introduction! One thing’s for certain – no matter how the story ends – his biography will be classified  adventure!

A brief bio of Bob Snow  (Robert James Snegosky)  published in the local Orlando newspaper  after he shook things up with the opening of Rosie O’Grady’s, Apple Annies, Lili Marlene’s  as part of   grand plans for the  Church Street Station   entertainment  complex.
Read the entire article about Bob Snow  described as “6 footer with wide eyes,” “a Renaissance man –  the ultimate adventurer – with a Hollywood twist.”

1981 – Florida Magazine piece on Bob Snow entitled:
Bob Snow. With the vision of a skypilot and the gusto of a barnstormer he turned downtown, uptown.

1989 Orlando Sentinel article announcing Bob Snow’s departure from Orlando and his move to Las Vegas entitled:
Snow: Time to get off Orlando stage

Present Day – For a look at what Bob Snow’s accomplished in the past and what he’s planning for the future, peruse his web site www.Snow_and_Associates.com   You’ll find photos of old friends – people and venues – bios and more.

Back to top
TAGS: Bob snow, Church Street Station
ATTACHMENTS
Bob Snow Bio Photo
Bio of Bob Snow published on Bob Snow after he shook up things in Orlando with the creation of Church Street Station...
Skywriter draws on skill when plane stops flying - Bob Snow - December 1985
Article published in the December 28, 1985 edition of the Orlando Sentinel Metro Final entitled: Skywriter draws on skill when plan stops...
There are currently no audio related to this memory.
There are currently no video related to this memory.
Snow and Associates

If you've ever wondered what Bob Snow did after leaving Church Street Station and what he's up to now, check out his company web site www.Snow_ and_ Associates.com
You'll find photos of old friends - people and places - and exciting updates on what Bob has done and is planning for the future.

For a look at what Bob Snow's accomplished in the past and what he's planning for the future, peruse his web site www.Snow_and_Associates.com   You'll find photos of old friends - people and venues - bios and more.

Brief bio published in the local Orlando newspaper about the man who created Church Street Station. Here's a short excerpt from the bio:
He hunts the most ferocious animals on earth with his arsenal of rare shotguns. ... He stockpiles hundreds of elegant, precious antiques as if they were going out of stule . . . again.  And he refuses to build from the ground up in the suburbs of any city. He's a believe in downtowns. That's where old time values were born. Where buildings were once crafted like pieces of sculpture. Where beauty and antiquity cry out for recognition."Everything here is real," he says, using Church Street as an example. "The bricks are real, The building has a sense of history. You can't duplicate authenticity."

Bob Snow: With the vision of a skypilot and the gusto of a barnstormer he turned downtown, uptown. Article in Florida Magazine on Bob Snow by Jeffrey Zaslow. Includes of Bob Snow and his wife Nancy.
"Wilmer Mitchell, Snow's legal counsel, remembers a day in 1972: We pressed our noses up against the glass where Rosie's is now and all I saw was a shambles and all he saw was a dream. He turned to me and said, 'Isn't it beautiful?' just as I was getting ready to turn to him to say, "This is awful.' But do you know what he described for me exactly what you see when you go down there at night now. Exactly."

Four page article entitled: Bob Snow reveals his exciting plans, dreams : Here, for the first time, are some of the amazing details of the Church Street hotel where people will actually sleep in old railroad cars.

1989 Snow leaving.compressed.pdf
Bob Snow : Time to get off the Orlando stage

Article in the Orlando Sentinel, pp. A1, A6) announcing Bob Snow's departure from Orlando and Church Street Station.

People Magazine article in the July 12, 1976 edition entitled: "One the Move : Bob Snow is the Florida Barnum who can't stand promoters."

Florida Magazine article  published with the November 28, 1976 edition of the Sunday Sentinel Star,  entitled "Downtowners" about Bob Snow and others who reside in the downtown area.