Friday, January 27, 2012: Shane speaks with Devy Jefferson for the Orlando Memory project during the Zora! Outdoor Festival of the Arts in Eatonville, Florida. Ms. Jefferson was born in Brooklyn, New York in 1960, grew up in the Bronx, and moved to Eatonville in 1977. She has lived in this town for about 26 years. She remembers visiting “The Rainbow” club when she was younger and tells us about some of the changes in Eatonville over the years. Ms. Jefferson has worked for the Zora! Festival for 12 years and also works for other events in the town. 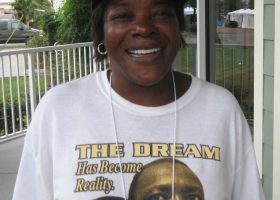