In 2007, he created the iconic cast bronze knight with lance on horseback statue located outside the main entrance to the UCF Bright House stadium. He has also worked on many other projects such as carving doors and furniture for former Disney executive Dick Nunis, creating various sculptures that were on display at the Mercado on International Drive, and a sculpture for the lobby of the old Barnett building.

Reynolds enjoys adding variety to his work and creates commissioned murals every few years. Most notably, he painted the floral scene on the wall of the library parking garage in downtown Orlando, the wave of communications polyptych on the downtown Orlando AT&T building, and the homage to citrus’ heyday on the Winter Garden Heritage Museum. 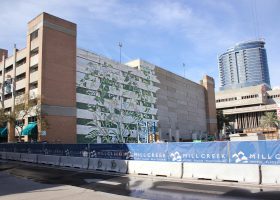 Library Parking Garage Mural
Giant flowers, vines, and animals sprout from the wall of the library parking garage in downtown Orlando. This mural, originally painted by... 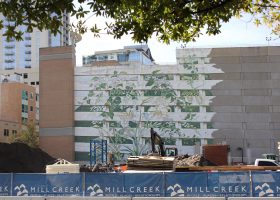