LISTEN Part II (18:29)  Dr. Wehr speaks about Will Wallace Harney, the Randolphs, and the local story authors of the day.

[Harney] But he did come at a right time because after the Civil War the newspapers changed. They changed from being a personal information sheet to a rather informal one of telling events and news. And there was these local story authors that you read about in every lit class at the university. But they had no outlet. And so a whole group of magazines were coming into existence and they loved to publish these. And this is where he published many of his works: The Atlantic Monthly, Harper’s, Goody’s Magazine, things of this nature. I had in my possession at one time all of his works even some unpublished works…

Fortunately, someone around here… Billy Morgan published these works and I recommend you take a look at these stories. [See: Pine Castle Anthology: the Collected Writings of Will Wallace Harney – William S. Morgan] Particularly the short stories, they’re quite interesting. He had the wit. He had the courage. He was not afraid to say what he thought and often times he did. And sometimes he realized that maybe he shouldn’t have. He was a little safer down here because he published in the Cincinnati Commercial which I might add at that time was the second greatest newspaper in the United States. Being political in nature which is what we were after the Civil War, the Cincinnati ranked right up with the New York newspapers and the St. Louis newspapers. And so he had a good outlet for the stories he would tell.

But what makes Harney unique is that he told about things that happened right then and there… These are right off the press stories. Some of them, some of the residents did get to know some of the stories. He complained that they would steal the newspapers because he didn’t get to see what he wrote until he got the newspapers through the mail…. And his stories about politics, and Orlando, and the courthouse are great stories. His stories about how they handle animals, and how they handle youth. And one of my favorite stories, bar none, it just tugs at you, is his story about house building right down here on Shingle Creek. He built a house and he tells about the house. Everybody pitches in and works together to build this house and then to celebrate at night. And then as he leaves to go home he says, “As I pulled away the cool air and the distant echo of the bugle of a call of a herdsman escorting me home….”

I interviewed old Judge Cheney when he was still alive. This was back in the early seventies. I don’t think he cottoned to me very well. I was a young Turk at the Historical Society downtown. We were on the second floor behind where the library is now. That’s where it was then. I was trying to say, I have students that will write little papers would you publish them in your four page? Well, he wasn’t sure about that. But I cornered him one day and I said, “I need to talk to you. Do you mind” He married a Randolph. Now maybe her name wasn’t Randolph because she took her father’s name, but she was a relative of Will Wallace Harney’s wife. I said, “What did she die of?” Nobody knows. And he says, “She died of tuberculosis.” That’s the only thing that they could figure out. And then he tantalized me by saying, “There’s a large portrait of her hanging in some house in Baltimore….”

And then Judge Cheney unburdened himself one day. If you remember, you know where the railroad runs today down by Lake Highland? There was a trestle there at that time and everybody worried about the trestle because there was also a Mill Pond up the way they worried about washing out. Billy said when he was younger we’d get the young boys, we get on our bicycles and ride out to watch the train over the trestle. And he said he got the idea one day we were riding rapidly into town yelling, “The Train Ran Off the Trestle!” Of course, the train always runs off the trestle, but it stays on the track. He didn’t tell them that. So, they went screaming into town, “The train ran off the trestle!” The town ran out to the trestle and Billy ran the other way because they were after him…. 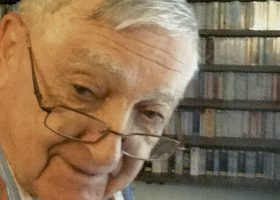 Dr. Paul Wehr
Dr. Wehr, an historian of the American Frontier, taught history at the University of Central Florida for 25 years. History and literature,...
Dr. Wehr, Part I