Edvard Radzinsky visited Orlando to speak at the University of Central Florida in 1988. On October 23, 1988, the Orlando Sentinel said this about his visit:

Edward Radzinsky, the Soviet Union’s most popular playwright, will make three appearances this week and next in Orlando, as part of the University of Central Florida’s World Writers Series.Radzinsky will speak about his writing career at noon Thursday in the Board of Regents Room on the third floor of the Administration Building at UCF. He will discuss the topic “Shakespeare to Radzinsky in Soviet Theater” at 4 p.m. Saturday at the Orlando Public Library, and he will conduct a playwriting workshop at 7 p.m. Nov. 1, also at the library.Several of Radzinsky’s plays have been produced in New York at the Cocteau Repertory Theater. His latest, Jogging, which is highly critical of the Soviet ruling class, has been compared to Who’s Afraid of Virginia Woolf? Radzinsky’s talks, presented by the Orlando Shakespeare Festival, are sponsored by UCF’s English department and The Orlando Sentinel. All events are free and open to the public.

Professors Finley Taylor and Anna Lillios hosted Edvard. Dr. Taylor knew that I loved to be a “tour guide” to visitors to the area and contacted me to see if I would like to take Edvard to Disney. I was excited about the prospect of meeting someone from Communist Soviet Union and being able to ask him questions about how people were able to cope with living and working in a socialistic society. I was a bit concerned though, as Edvard spoke very limited English and I knew only two words in Russian – yes and no.

I thought Edvard was just some guy visiting the university and had no idea that he was the “Neil Simon” of the Soviet Union – not that he produced comedies – he was the most beloved and popular playwright in the Soviet Union! He was a frequent guest of Mikhail Gorbachev and the American Ambassador to the USSR. I discovered this after our time together and was mortified that I had just treated him as one of the family instead of the celebrity that he was. But thinking back on it, he probably appreciated that as far as we were concerned, he was part of the family.

In addition to going to the Magic Kingdom, I insisted that Edvard experience our celebration of Halloween at Church Street Station in downtown Orlando. Edvard came to dinner at our home in Lake Mary and we discovered that he loved lemon meringue pie. He told us that it was always served at the American Embassy in Moscow and Edvard was a frequent visitor.

We tried to explain the celebration of Halloween to Edvard but he was amazed that Americans would have such a happy life that they could find joy and fun in dressing up in costumes to mock death. He was unsure about dressing up, but when Dr. Taylor donned his self-designed ghoul / alien costume, Edward decided to participate. We brought out all our extra Halloween costume parts and he choose a skull mask, yellow long hair wig and a Rosie O’Grady’s hat for his costume. Ashley, Christopher and I were dressed as Snow White, the prince and the wicked witch/queen – costumes that had placed us in the finals at the Walt Disney Shopping Village Halloween Costume Contest just a few days earlier.

Edvard absolutely loved the Dixieland music at Rosie O’Grady’s, the Rock n Roll at the Orchid Garden and country music at the Cheyenne. He also loved the Halloween costume contest and street party on Church Street. We had a great time.

A few days later, I picked Edvard up and, with Ashley, we headed for Walt Disney World. Edvard was amazed and astounded that there could exist this entire area the size of a small city totally dedicated to having fun. He said that people in the Soviet Union would not understand that having fun was given so much thought. Edvard and I spoke at great length in his broken English about socialism and how it enslaved the people of Russia. When I asked how he was able to travel to the United States freely he told me that they would not allow him to take his daughter with him and he understood that he should return. He also said that he could not bring any money with him when he left the USSR. He had to depend on the kindness of people who invited him to come and speak in the United States – in this case Dr. Anna Lillios and her family were hosting him in their home, and others, like myself, were kind enough to act as tour guides and show him around Orlando.

I found Edvard to be a very likable, kind, intelligent individual. I felt sorry for him and all the people having to live out their lives under socialism. Edvard came back in 1993 to promote his new book: The Last Tsar: The Life and Death of Nicholas II. Anna Lillias hosted a reunion at her home on October 24, 1993 and I made lemon meringue pie for Edvard. He was happy and surprised that I remembered his story about the American Embassy in Moscow and the Ambassador’s love of lemon meringue pie. Edward signed my copy of the above book with the message: “To Kim and Oliver, In memory of our encounters, Your Russian Friend, Edvard.” Instead of dating it 10-24-93, he dated it 7-17-93. This was his Russian humor – July 17th is the date that Tsar Nicholas and his family were brutally executed by the Bolshevik revolutionaries in 1918.

Edvard was afforded a better dwelling and living conditions because of his status as Russia’s most frequently staged playwright, after Chekhov, but these were still meager when compared to the average American’s situation. He was a regular guest of Soviet leader Mikhail Gorbachev and it was this friendship and Edvard’s training as a historian, that led to his being permitted to access secret files on the Tsar’s murder. Some of these documents are contained in his book. Edvard brought little gifts for his American hosts and he gave me a record album of Russian folk songs and a small carved wood structure that appears to be an onion domed Russian Orthodox church.

I was overjoyed when the Soviet Union fell and Edvard was no longer a passive prisoner and allowed to travel as he wished without any limitations.  Check out photos below.

IMAGES and DOCUMENTS below. 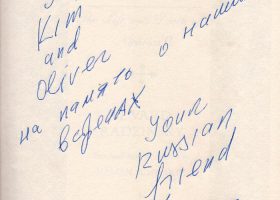 Edward Radzinsky - Autograph
Edvard returned to Orlando in October 1993 to speak at UCF and promote his new book about the extermination of Tsar Nicholas... 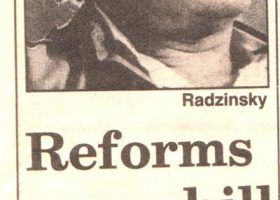 Edward Radzinsky - Orlando Sentinel
Edvard visited Orlando in October 1988 to speak at UCF and give a talk at the Orlando Public Library. This photo was... 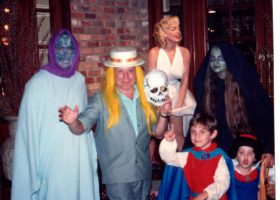 Edward Radzinsky - Halloween 1988
Edvard visited Orlando in October 1988 to speak at UCF and give a talk at the Orlando Public Library. We invited Edvard... 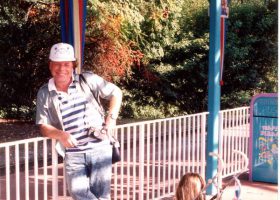