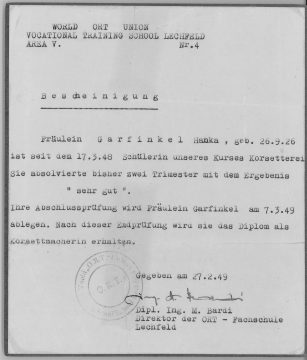 Helen Garfinkel lived at  the Ainring, Germany Displaced Persons Camp from 1946-1949. The  displaced persons  camp (DP Camp) was a former German Air Force base located  near Freilassing  ten miles from Hitler’s palace.  While at the camp she joined the Theater Troupe and pursued her education.

She  met her future  husband, Joe Greenspun, a Holocaust survivor from the Ukraine,  at Ainring DP Camp.  When the camp closed in 1949 Helen Garfinkel came to the United States of America when a Jewish agency sponsored her move to Piitsburgh. Joe Greenspun moved  to Cleveland. They became reacquainted through a friend and were married in Detroit in 1951.  In 1973 Mr. and Mrs. Greenspun settled in  Orlando with their two daughters, Pauline and Rita.

Helen Garfinkel Greenspun was selected by Orlando Magazine, January 2010, as a “Good Neighbor Who Gives from the Heart” for her contribution to the Central Florida community volunteering for the Holocaust Memorial Resource and Education Center of Florida. 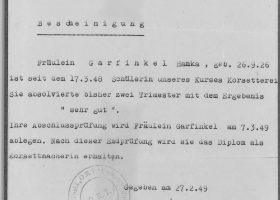