Jack Branham, Sr. is remembered as one of Orlando’s most respected businessmen.  During World War I he served in the Navy, then attended Rollins College.  After a stint in the automobile business he joined with Richard Tucker  to form Tucker & Branham Insurance and Mortgage Company in 1925.  Mr. Branham also administered the Orange Memorial Hospital, first as treasurer then vice president and then president.  He served on the Orlando Utilities Commission during the 1940s and early 1950s and was president for three terms.  He also was a director of the First National Bank, a president of the University Club, the Rotary Club and the Orlando Insurer’s Association.  Jack Branham served the First Presbyterian Church as a deacon.

This interview was conducted on 7-29-1975 by Jean Yothers for the Friends of the Orlando Public Library’s Oral History Committee.  We are grateful for the Orange County Regional History Center‘s making this recording available for Orlando Memory. 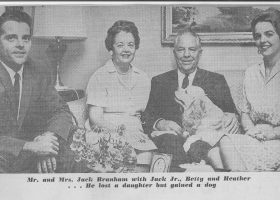