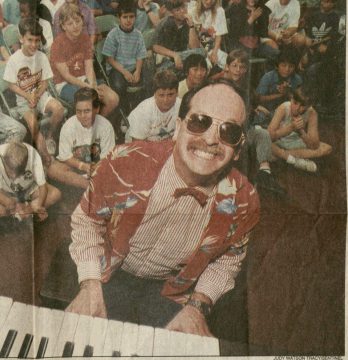 Michael Kramer is a performer and teacher beyond compare but he came to this in a round about way.

Mr. Kramer attended Rutgers University and was an accountant in New York City for 18 years. He was a self-taught pianist but also had some formal training. He eventually left accounting, moved his family to Lake Mary in 1988 and became a professional musician.

At the suggestion of his wife Sheila (publisher of Lake Mary Life magazine), he created a program for elementary schools in Seminole County called “Jazz University” a mixture of history of Jazz and performance that was energetic and highly entertaining.

The popular programs caught the attention of the Orlando Sentinel’s STYLE writer Jim Abbott who wrote an article about him which was published on the front page of the STYLE section on February 26, 1991 entitled: “The Johnny Appleseed of Jazz – Michael Kramer is introducing elementary school students to the music that begat rock and rap.”

Michael Kramer will always have a special place in the hearts and lives of my children as he is the person who taught them piano and sparked a love of music in their lives. They are now both musicians – my son, Chris Peters, is a pianist and guitarist with over 60 guitar students and my daughter, Ashley Peters, is a vocalist who has performed with the Orlando Opera and with Orlando Philharmonic and a choral director with Seminole County Public Schools. 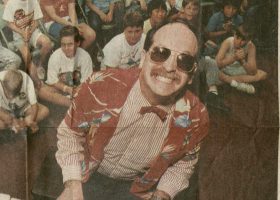 Article and color photograph entitled "The Johnnyseed of Jazz: Michael Kramer is introducing telementary school students to the music that begat rock and rap" published in the February 26, 1991 edition of the Orlando Sentinel on the front page of the STYLE section.