I was 9 months old when my parents moved to 1203 West Smith Street in College Park. I grew up and we had such a wonderful neighborhood. Everybody knew everybody and it was such an exciting time…

Growing up in College Park

The Davis’ used to live across the street from us and Mr. Davis every Saturday night just about would have us children over and he would do movies and cook popcorn and we’d do Tom and Jerry. Plus he also had a wonderful train collection that he would pull down and he would set the trains up and we would watch them for hours. And our other neighbor, Mrs. Jenkins was wonderful, we would play jump rope for hours and she would turn at one end while us children changed on the end of the rope and we would do that for hours. And, of course, Bobby had one of those little metal Army jeeps that we all loved to take a ride in. And Mrs. Brown lived at the end of our street and she had the most wonderful displays, Christmas displays that they would make and paint. And she won I don’t know how many times the city’s most wonderful display at Christmas time….

My childhood sweetheart was Bobby Jenkins and my niece nine months younger than I am she went with Pat Davis so we took square dancing lessons down at Bob Carr and we enjoyed it. And we would catch, we were allowed to catch the bus and come down to the movie theaters. They weren’t afraid that we’d be snatched because our neighborhood and community just wasn’t that big at that time. And we took baton lessons, we took piano lessons, we took voice lessons, you name it we just about took everything.

I went to Princeton Elementary School and my mother would walk us to school and she would come back to walk us home. Then they built Lake Silver Elementary School which was right two and a half blocks from the house and we went over there. I went to Robert E. Lee Junior High, they call Lee now, then Edgewater High School. My father died when I was 13 years old… and I graduated from high school knowing that I needed to go to work… and I had a job all lined up at Hartford Insurance when I graduated. I already had the job and I went to work.

I  did a lot of overtime. I worked in the policy writing department.. and then later on I got a supervisor position and was the supervisor of what they call the Total Information System there was about 19 in that department. I left there and went to work for Reliance Insurance Agency. I also worked for an engineering firm, was really interesting, Bill Palm Glasson Ratcliffe Engineering. Later on I met somebody that said that they had some openings at Kennedy Space Center so I put my application in….

So I went to work with Rockwell International and I was working in the Orbital Processing Facility where the shuttle was being worked on by a whole bunch of employees… and I was in charge of the titles for the vertical. Well, I don’t like heights and I had to climb all the way up to the vertical and they had stairs going up. I wouldn’t dare look down. I finally made it up there because I knew I had to go up there because I had to get the information on which tiles were going to be splashed so that we could send the patterns off so that we could get the tiles back from Palmdale, CA so they could be put on the shuttle.

I was the scheduler for the Columbia, the Challenger, and the Discovery. I was in charge of those three shuttles of getting the information from the engineers and I could also read the engineering orders on the tiles so that we would be able to get the patterns on schedule for Palmdale to get them back to get them onto the schedule. Also, I did books by hand and on computer so when the computers went down then I would have all the tile information by hand. I was in with a group that we were awarded with our pictures and certificates on a modification that we did on the two shuttles of the 99 it would be the Columbia and 101 would be the Challenger. But anyhow that was a wonderful, it was a surprise. I loved it. And the only job I’ve ever loved was working at Kennedy Space Center.

Seeing the astronauts come in and then looking the shuttles over to see where the damage… underneath were your high density tiles on top were your low density tiles. And they would come in – I have signatures, I have a jacket with all kind of astronauts signatures on them. And I’ve done a walk through the VAB. We had to do a walk through on the launch pad and that was in case we delivered something out to the launch pad and something happened out there we’d be able to get off and you would have to be able to get off in a basket and go down. I’ve done a walk through the 747 at the launch pad and where the shuttle is piggybacked back on that….

Then later on my niece, Beth, and my other niece, Katherine, we opened up a dance and aerobic apparel shop in Pine Castle called Steppin’ Out. And we sold ballet shoes, pointe shoes, leotards, tights. We did a Jazzercise National Convention Fashion Show and we used to have people all the way from Jacksonville and up towards Savannah to be fitted for pointe shoes at our store….

Daughters of the American Revolution

So my cousin BJ McKee wanted me to join Sorosis which is a very old organization here in town… and her mother was a Dann. So I joined and then she says, “Oh let’s join the Daughters of the American Revolution.” I said okay… and you have to prove your lines so my line wasn’t proven so I had to prove it. So I did and I joined in 96. And I was the Good Citizenship Chairman for many years, eight years and that was for high school students that you would give them a little pin and a certificate for being a good citizen [and a savings bond.]

And then one day I got a call that they wanted me to be regent and I had never been anything other than the Good Citizenship Chairman… So what I did is I ordered everything I could from national headquarters and read and Anna Benson and Joyce Parker they were the past regents at that time, they helped. And I became regent in 2000, 2002 and I became the first honorary regent of our chapter. And I also joined the Heritage Club in Washington, DC. I was the first member of our chapter for the Heritage Club in Washington, DC….Then 2003-2005, Jean Mann who was running for state regent for Daughters of the American Revolution asked me, “Have you ever thought about running for State Librarian?” …so I became the State Librarian for DAR… and then after the State Librarian was over I did the President General’s Project Washington, DC…

Colonial Dames of the 17th Century

Then a lot of our members in the DAR belong to the Colonial Dames of the 17th Century. They usually invite you to these lunches. So I went and was interested so that meant I would have to go past my revolutionary ancestor because their requirements comes in between 1601 and 1701. And I knew that our ancestors had come in Stanford, CT in 1684. But you have to have proof of the extra lines. Well, I’m eight generations straight so therefore I already have most of the generations I just have to get the proof on the other generations. So I did and I became a member. And then I was chaplain, and then I became president. Now I’m on my second term. And all my programs are between 1601 and 1701 so it makes you go back and read your history of one took place.

One of my programs was on Elizabeth Clawson which was the eight generation, great grandmother, you know, great, great, great who was tried as a witch in Stanford. I have the talk on it and I have the outcome on it. She got off. But the trial in which she went through, how they tied them up, right hand to the left leg and left hand to the right leg and threw them in the water when she floated she was considered a witch. But anyway I have the papers showing how everybody in the community vouched for her. She was able, they let her go; one of the other ladies was hung.

United Daughters of the Confederacy

And then I also joined United Daughters of the Confederacy… and I’ve been president of that twice also. I’ve been registrar, treasurer, chaplain, corresponding secretary…. Also I have helped plan many memorial services for Greenwood Cemetery.

The Daughters of the American Revolution and Colonial Dames of the 17th Century we go out at the end of the month at the Veteran’s Healthcare Center at Baldwin Park. We sing and they bring in the veterans and they have a domiciliary group that comes in those are your homeless veterans, Claire Hessler’s is head of that.  She’s a they call VS VA she’s the chairman of it.. You’re appointed by national. I’m a deputy and so is Joyce Parker and she arranges the music and we get everybody to sing… We do memorial services out at Woodlawn. If a veteran passes away and they want our seniors to come we do that. We’re on the Orlando Veteran’s Mayor Advisory Board for Veterans. I was the first regent to be involved in the Veteran’s Day Parade after 17 years. They hadn’t had one. So I participated in that and thereafter everybody participates every year in the Veteran’s Day Parade which is really nice…. And we try to do as much as we possibly can at Christmastime, Easter or Valentine’s. They get goodie bags, Easter they get goodie bags, Christmas they get like socks, underwear, T-shirts, anything, soaps, electric toothbrushes, anything they need. Anything that they need that we can provide for them we do, that’s what we do for our veterans. The Daughters of the American Revolution, the state regent, Sue Bratton raised over $150,000 for the Haley House over in Tampa… Now Lake Nona is going to have a McDonald House and a lot of the veterans volunteers we’re going to be shifting to Lake Nona….

Yes, I’ve lived here all my life. I don’t want to live any where else. I went from College Park area to the Pine Castle area because my husband built a house near his mother who is a widow and his father was a veteran, a WWII veteran, and he worked for the Martin Company [Lockheed Martin]. My husband’s father he was an engineer out there. He helped implement, this isn’t a secret anymore, all the infrared on the jets in Iran when the Shah was in power and that was interesting listening to him on that… 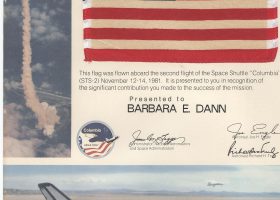