Interview with Orlando native Bob Serros at the “Sneak Preview” for the restored Saint James Cathedral in downtown Orlando, November 13th, 2010. Mr. Serros was baptized in the original wooden church and recalls, “the murals in the chapel which were part of the original wooden church were part of the church in which I was baptized… To see these beautiful murals restored and now back in the cathedral” is a special memory for him. Mr. Serros and his two older brothers all attended St. James School. Mr. Serros remembers the school and making his First Communion and Confirmation in the 1930’s. The sacraments were memorable events for him. Father Bishop was here in the late 1930’s and early 1940’s. Father Farley, later Monsignor Farley, selected Mr. Serros as one of the first church lectors. In those days only men were lectors. Mr. Serros also served as a Eucharistic Minister for many years and as a Special Minister bringing Holy Communion to the sick and homebound. He says, “My church experience has been absolutely critically important to my spiritual life.” Mr. Serros remembers the priests through the years, Father Bishop, Father Page and Monsignor Farley. He also remembers when Orlando was much smaller, “a safe town, we didn’t lock our doors… definitely a small city feel.” When asked what he treasures about Orlando he says, “I treasure riding my bike around Orlando… and early memories simply playing in the neighborhood. The very simple things in life that young boys do with their friends.” 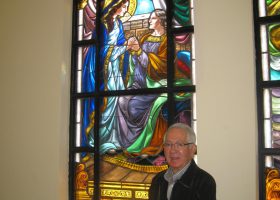 Robert Serros, St. James Parishioner
Interview with Orlando native Bob Serros at the "Sneak Preview" for the restored Saint James Cathedral in downtown Orlando, November 13th, 2010....
There are currently no audio related to this memory.
There are currently no video related to this memory.
St. James Catholic Cathedral of Orlando
http://www.stjamesorlando.com/


Commemorative Booklet for the St. James School Gala Event of the Year! Scholarship Dinner - Dance, Friday November 5, 1976 at the Carlton House Resort Hotel, 6515 International Drive. Includes letter from the Pastor of St. James Church, Father David Page, outlining the purpose of the event is to provide scholarships funds for students, an "investment in the youth" of our community. A history of St. James School, "St. James School: The Past" begins on page 8. Jack Hardin, General Manager of the Carlton House Resort Hotel gave all the facilities of the hotel for the event at no cost. Arline Benedetti did the banquet decorating. Scholarship donors and patrons are listed by name including many area businesses such as the George Stuart Foundation, Southern Fruit Distributors, Inc. Blue Bird Brand Citrus Products. Last page of the booklet gives a history of George Stuart, Inc. with a photo of George L. Stuart, Sr. September 4, 1905 - January 11, 1976. Photos of school staff and scholarship committee begins on page 10.