It’s clear from Spc. Patrick D. Deans’ Facebook page that he understood the danger inherent in becoming a soldier.

“A Veteran is someone, who at one point in their life, wrote a blank check payable to the United States of America for an amount up to, and including their life,” Deans posted on his wall Nov. 10. “That is beyond honor, and there are way too many people in this country who no longer remember that fact.”

A little more than a month later, Deans was one of six soldiers killed in Kandahar province, Afghanistan by a suicide bomber. He died Sunday, two days before his 23rd birthday.

Deans served in Iraq during his first tour of duty and was sent to Afghanistan after he reenlisted, said Butch Herdegen, 23, one of Deans’ closest friends.

It was in Howz-e Madad that Deans and his fellow soldiers, including Spc. Jorge Villacis, 24, of Sunrise, died when an explosives-packed minibus blew up at the entrance to a joint NATO-Afghan base, the Department of Defense said.

“He was a great guy, a loving guy,” said Herdegen, of St. Cloud, who grew up with Deans. “He would do anything for anybody, for me, for a stranger on the street. He gave his life for us.”

Deans had gone back to the Middle East in early November after a visit to friends and family in Central Florida. He and Herdegen indulged in Deans’ passion, football, by going to a Tampa Bay Buccaneers game and playing touch football with Herdegen’s younger cousins. The friends played Pop Warner Youth Football as boys with the University Cougars. Deans was a Seminoles fan while Herdegen roots for the Gators, setting up a friendly rivalry.

Deans — whose friends called him by his last name — also loved to deep-sea fish with his father, Herdegen said.

“Home. Ahhhh,” Deans wrote on Facebook Oct. 23 after arriving a day before.

The only child of Patrick M. Deans, a corporal with the Orange County Sheriff’s Office, and his ex-wife, Robyn Deans, of Seminole County, Deans grew up in east Orange County. The family moved to Narcoossee in east Osceola County, where Deans attended Harmony High and played on the school football team. He moved back to east Orange with his dad and graduated in 2006 from Timber Creek High, Herdegen said.

“I remember him as a real quiet guy,” said Sr. Master Sgt. Don Dowdy, who heads the Air Force Junior ROTC program at Timber Creek. Deans was in ROTC during his senior year.

Brittany Wilds, 20, of St. Cloud, remembered Deans as someone who liked to joke and make others laugh.

“He was always the life of the party,” said Wilds, who also went to Harmony High. “He was a lot of fun.

Villacis graduated from American High School in Miami-Dade County and worked as a mechanic before he enlisted in September 2008.

“He is a hero,” said Villacis’ brother-in-law, Ricardo Geribon of Pembroke Pines. “He was just a great kid, with a wonderful smile. He was never mad at anyone.”

It was the deadliest attack on coalition troops this month and the latest loss for the 101st, which has fielded soldiers this year in two of Afghanistan’s most violent regions, the south and the east.

The attack came less than a month after six Fort Campbell solders were shot and killed by a lone gunman from the Afghan Border Police during a training mission in Nangahar province.

It also came just days ahead of a major White House review of its Afghan strategy, following President Barack Obama’s decision last year to send 30,000 reinforcements in a bid to reverse gains by the Taliban since they were ousted from power in the 2001 U.S.-led invasion.

So far this year, 37 soldiers, sailors and Marines from Florida have been killed in Afghanistan, among more than 1,400 American casualties since the war began in 2001, according to Defense Department records. 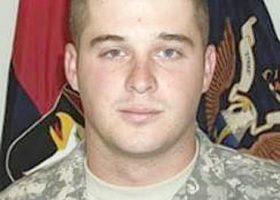