Charlie Hayes, I am from Pine Castle, Florida. I was born and raised here.

Not getting caught in mischief. If you had energy to burn you had to expel it which mostly centered around the lakes here. Lakes were pristine then. You could see the white sand bottom. Gators and the moccasins they didn’t bother you. The food chain was such all you’d do is splash the water and they would take off surely.

Spartan. We were very humble people. All of us were dirt poor back then. Anybody that lived during the Depression and losing my father at an early age. He went in the hospital for a gall bladder operation and the gall bladder operation was a success. But, they kept him in the hospital for a week, he got pneumonia and he died there. And that took one of the family… My mother was a nurse and I attribute some of our longevity to her efforts along with regular trips to the woodshed to get your attitude adjusted. I was born in a tenement house. When my dad stepped out of the picture his job while he was at the sawmill he worked as a cabinet maker.

In 1928 Frank Karel, the sheriff of Orange County, they formed a motorcycle deputy sheriff’s patrol and my dad jumped on that like a fish on a worm because that was a guaranteed paycheck every month. His route to patrol was the Cheney Highway. The ribbon cutting, Cheney Highway was not opened up, paved until sometime, I think 1922 they had the ribbon cutting. 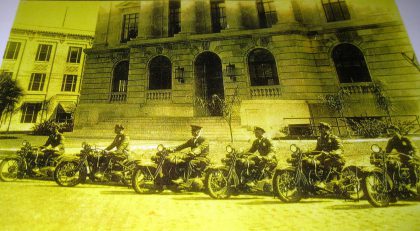 Perry K. Hayes is pictured fifth from the left. VIEW

Did you go to school in Pine Castle?

I am a permanently disabled WWII Veteran…. Quite a lot of hats we wore. In the demolition part of it I lost hearing… When you went in the service did you go overseas? Yes, I did I went through a crash course or two and zoom man I was off east. I never went to the Pacific. I was in the European Theater in North Africa, Sicily, Italy, and finally into France…. I got sent back on a hospital ship….When I came out of service I did not want my mother to see me in the shape I was in. I had a brother who was in the Army Air Corps stationed in California and I had my train ticket made out there. And I stayed out there with him until he got leave time about five months later and we both came home then… 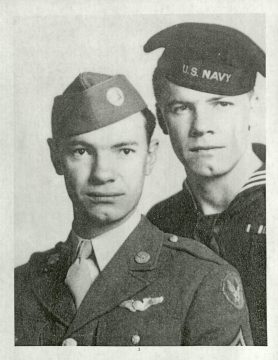 Charlie Hayes is pictured on the right in uniform with his brother. VIEW

That is the complete sheriff’s department in 1928. And that’s my dad on the end. You see what a rascal he was. That gentleman right there was Frank Karel that was the sheriff that’s his son, Frank Karel, Jr. And that’s our cousin Dave Starr. He was a plain clothes man and Clara Reed was his secretary. 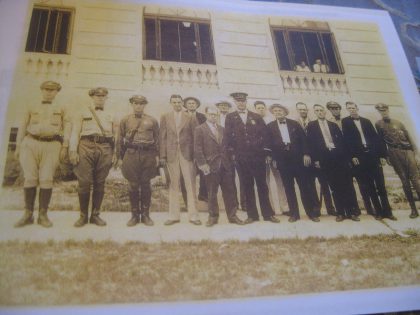 Perry K. Hayes of Pine Castle is pictured first from the left. 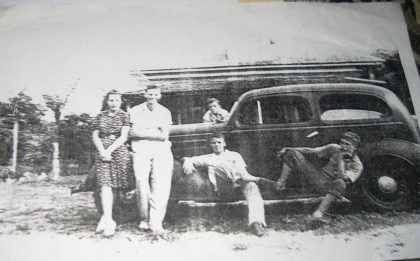 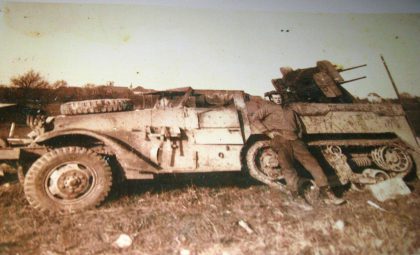 I nearly got drowned right there in the water. I nearly got drowned there. We had a gentleman that was taller than water, that was a minister. He put your head all the way down in the sand and I did have my full breath of air. I come up spitting water… Pine Castle Baptist Church. Yes, right at the end of the street where it goes down to the lake. 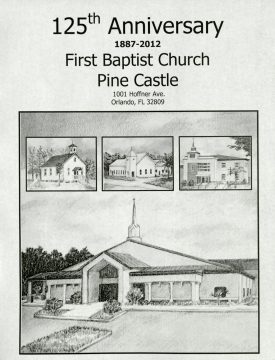 This is a Baptist Missionary Church that I go to [now] out toward Chuluota. That church only has a census of 210 people. This past summer they just celebrated a 129th anniversary. Seven pioneer families met on the banks of the Econolatchee River and that was the inception of that church, 179 years.

I was in Boy Scout Troop 36. Charlie Holls who has passed away his father was the court master. Then a gentleman by the name of Harrison Quimby took over for a while. And then two or three people took over. Charlie his son took over and Charlie passed away. So I don’t know who has that troop. Oh, it’s the Methodist Church there… We learned the basic values of life. Clean cut living. You had a Boy Scout Creed. There were 12 points I think in it: trustworthy, loyal, helpful, friendly, courteous, kind, obedient, cheerful, thrifty, brave, clean, and reverent. You learned a lot. And you see how those things get burned in even at this age? They made an impression.  Somewhere I have a picture of me in that scout uniform. The uniforms have changed since then radically. As a matter of fact one of the scout troops did a cleanup in our cemetery out there and really did us a nice job. That was one of the projects for going to Eagle Scout….

Special Places in the Community

The end of Randolph Street that was called Crittenden’s Dock and Scotchman’s Point. Scotchman’s Point there was an area there that Charlie Crittenden’s folks had. They had orange groves all over that place. And Datson had dairies out there right where Lake Conway Estates is Shenandoah. They had dairy operations in there. As a matter of fact, the county put up some historic signs along Conway Road. I took pictures of them. At the corner of Hoffner and Conway Road there was a roundabout. And on the corner where Belle Isle’s got a big thing with the clocks in it they used to have a concrete dipping vat that they put water in there and put chemicals in it that they dipped the cows in to get wood ticks off. 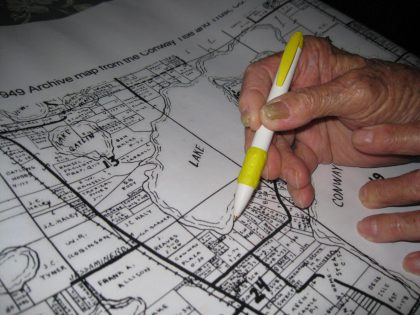 Charlie Hayes points to special places in the community in this insert from a 1949 archive map of the Conway area. VIEW.

We used to go swimming in that thing not knowing that stuff had arsenic in it. Colorful life as a kid growing up. But you got the knowledge of the whole area where Grover Holler was and what have you. It was a good time as I look back on it. You had room to grow up. Of course you went to the woodshed to get your mind straightened out, too. Just a happy go lucky kid growing up in the country. A guy barefoot like the guy that wrote the book, Huckleberry Finn. You didn’t have any worries. The adults did the worrying. But it was colorful in its own right. If we could flip that switch back it up there a few days. Childhood was a happy time that’s about the best way to generally cover it.

Well, the annual Halloween event of swiping somebody’s outhouse and putting it in front of Doc McCall’s drug store. That we did. Doc used to come by there the next morning before sunrise to see because he soaked the windows. Because we would do a lot of things on the windows and on the sidewalk plus the outhouse. But he’s a story within himself. He was a member of this church[Pine Castle Baptist Church]. He was 104 years old when he passed on. His folks were missionaries in Cuba. They started 42 churches scattered across Cuba in the Baptist religion. Doc could speak Spanish fluently, perfectly. And when he wanted to get us kids out of the drugstore he’d stick his false teeth out – ugh! That was back when he had to mix the chemicals and make the pills and you had to wait for the doggone things to get dry when you go to get a prescription filled…. 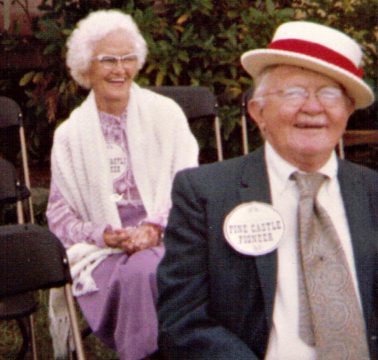 I don’t drink and I don’t smoke. That’s what’s propelled me to this age, plus divine help. 88 years old. I was born April of 1926. My grandmother delivered me at 8 o’clock in the morning by kerosene lamplight right there at Oakridge in the railroad track… The Lord’s still got something for me to do yet before he gets rid of me. He’s going to get that last shekel so to speak.

What do you appreciate most about living in our country?

One simple word: Freedom. That’s what a lot of us spilt blood for and so many people take it for granted. That’s a bad taste in your mouth.

Few people realize that the railroad tracks where the Sun Rail stops right now between there and Taft down at the railroad track where the railroad goes out Seaboard bought out that property and straightened it out. The railroad followed the road, the highway. And the steam engines back in my time, yes, right there at the Fair Lane the railroad had a great big wooden truck up there where they watered the engines up. And right across from that was the railroad section game and those were some of the first kids I played with. Yes, I learned to be very reverent of that thing. We used to, all the drinks back then had bottle caps on them. We used to go to different establishments there in Pine Castle and collect the things. We’d put them on the rails along there and the train would run over them. We’d make things like a coin and see who could throw them the furthest. Some kid stuff while we were growing up. Beautiful time. It reminds me of the little kid with Andy Griffith and Walton’s Mountain. Ah, man, you can close your eyes and just visualize living in an environment like that. Peace of mind and nature. And not desecrating nature… 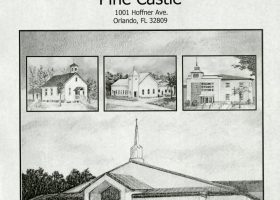 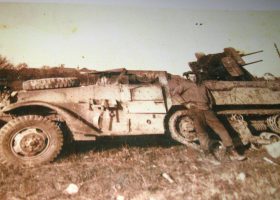 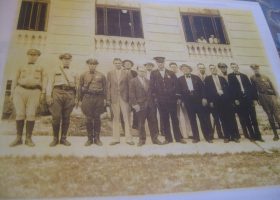 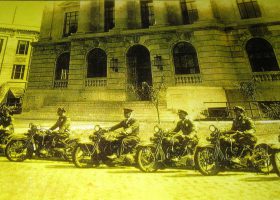 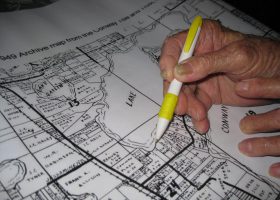 Pine Castle, an archive of place and memory...
Pine Castle native Charlie Hayes points to special places in the community in this insert from a 1949 archive map of the... 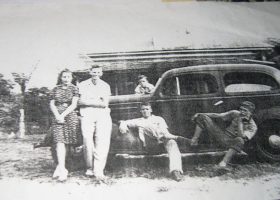 The First Baptist Church of Pine Castle began in 1887 when several families felt the need for a place to call their spiritual home. The church consisted of 26 members and for a while they met in homes and school buildings. About 1900, the Baptists joined together with the Methodists and Christian Missionary Alliance members to build the Union Church at the corner of South Orange Avenue and Wallace Street. In 1913, the Baptists moved into their own building at the corner of Orange Avenue and Hoffner Avenue...