On September 17, 1973 the City of Orlando dedicated Beardall Park in honor of Mayor William “Billy” Beardall. The program created for the dedication includes his photograph, an aerial view of the park, list of dignitaries a brief bio of Major Beardall from birth through his final year as mayor in 1952.

The program also gives the history of another landmark that stood on the site of the park for many years. It states that at a future date a monument would be erected in Beardall Park in memory of Mayor Beardall’s son, Captain Harald Martyl Beardall II who gave his life while serving his country during the Korean conflict.

Peruse the entire program.  Read the newspaper article about the time capsule. 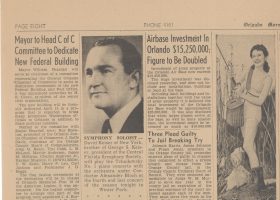 Newspaper artcile from the Orlando Sentinel about the dedication of Beardall Park and opening of the time capsule.

Peruse the program from the dedication of Beardall Park on September 17, 1973.