The story of Church Street Station from its conception to its death has been chronicled in the pages of the Orlando Sentinel. In doing research for this display, I was struck by the sheer number of times Church Street Station made the front page of various sections of the Sentinel. And don’t even try to count other mentions. According to the Orlando Sentinel database at www.ocls.info, the name “Bob Snow” has been mentioned in 473 articles between 1985 and June 2004!

Perhaps it was because everyone told Bob Snow he was crazy when the barely 30-year-old presented his plans for turning a vacant building into an entertainment destination. Perhaps it was because he was Jack to giants Disney and Sea World, and everyone wanted to see the little guy make good with the golden egg he’d found. Perhaps it was because Bob Snow always seemed to make good copy – like the time he paid off a bank loan by marching to the bank with Rosie’s Good Time Jazz band playing while the bank staff counted his payment – all in nickels. Or the time he plunked down $6500 in a saddlebag on Mayor Bill Frederick’s desk to fund the creation of the Orlando Police Department Horse Patrol. Or perhaps that wooden sign he had hand painted and hung behind the east bar which read: “Absolutely no Coca Cola products allowed on these premises.” Perhaps it was because Church Street Station was something different – not glitzy, not modern, not form without substance.

Church Street Station was real. Real buildings from Orlando’s past, real interiors hand crafted by artisans and antiques collected from around the world. Real people – entertainers who loved their work and performed there for years; waiters and waitresses who were part of the “show” not just there to take your order. Perhaps it was because Church Street Station was something more than mortar and brick, it was something original in a world of knock offs, it was more than a place, it was a place in time. Perhaps it was because you always felt like part of the family – the Good Time Gang as they referred to it. Whatever the reason, Bob Snow and Church Street Station always seemed to be the talk of the town!

Copies of the news clippings highlighted here and those presented in the exhibit are available on microfilm housed in Special Collections department on the fourth floor of the Orlando Public Library. 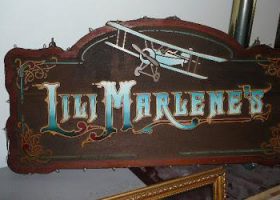 Lili Marlene's Aviators Pub and Restaurant
This is the sign that hung out side the entrance to Lili Marlene's. It was found among other artifacts and antiques that... 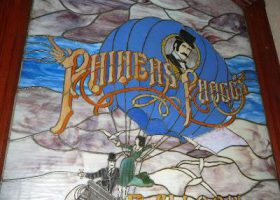