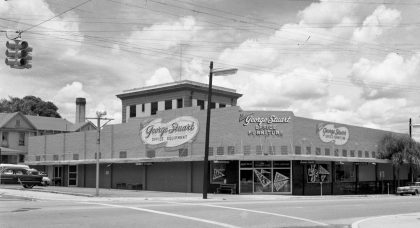 The November 18, 1989 edition of the Orlando Sentinel brought sadness to many Orlando residents who had frequented George Stuart Office Supply at Robinson and Magnolia since it opened in 1938. The Sentinel reported that the “51-year-old Orlando company that was synonymous with the office supply trade in Central Florida, filed this week to liquidate its assets under the federal bankruptcy code.”

They article went on to state that “the name George Stuart meant office supplies to Central Florida residents. At its peak in the mid-1970s, the company had sales in excess of $10 million annually and held a strong position in Central Florida’s office supply market.”

George Stuart Office Supply was like an office version of an old fashion hardware store. If they didn’t have it, you didn’t need it. They had virtually every type of typewriter or adding machine ribbon ever made. Folks would drive from miles around to visit the Robinson Avenue store to get their office supplies. In 1977 there were other locations at 520 South Highway 17-92 in Casselberry and at 2420 North Orange Blossom Trail in Orlando, but the store at 133 East Robinson Street was always my favorite. 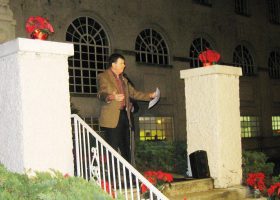 Commissioner Stuart Extends a Warm Holiday Welcome
No description has been added yet
George Stuart Office Supply circa 1960
George Stuart Office Supply company stood for decades at the intersection of Robinson and Rosalind Streets with the parking lot and entry...
George Stuart Advertisement October 1977
This advertisement was on the back cover of the program for the 38th Annual NAACP Convention held in Orlando, October 21-23, 1977....
College Park Oral History Night with the Stuart Family, Part I