The Jaws attraction is one of the original to the park when it opened in 1900. It had rocky beginnings, however, with problems that delayed it’s opening for a number of months. The ride is still basically the same as it was when it first opened but has been tweaked over the years. The thing our family liked most about the area (other than traversing the streets during Halloween Horror Nights and having the bejeebers scared out of us) was posing with the great white shark in the plaza. I am not the most photogenic, so this is my favorite photo spot, as I get inside the shark! 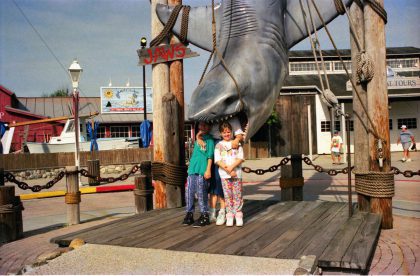 This photo was taken in 1992 with my kids Ashley and Christopher, however, we have many more just like it taken through the years. 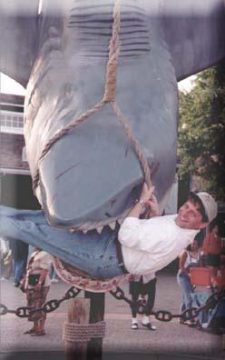 This is another favorite photo with the great white shark. On several occasions a group of us grownups enjoyed Mardi Gras at Universal Studios. One of our friends, singer and entertainer Clark Barrios is actually a Cajun from New Orleans, so it was always a special event when he could join us for the festivities.

If you have been there or have photos, join the discussion! 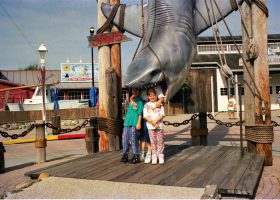 Jaws 1992 - Universal Studios Orlando
This photo was taken in 1992 with my kids Ashley and Christopher, however, we have many more just like it taken through... 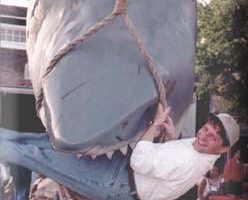