Local Veterans remember their war experiences and reflect on the meaning of Memorial Day.

Interviews with Central Florida Veterans who served their country in World War II, the Korean War, Vietnam War and other military service.

Veterans reflect  on how service to their country changed their lives and the meaning of Memorial Day. 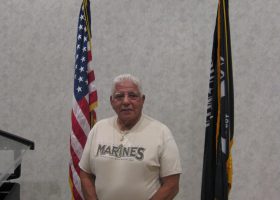 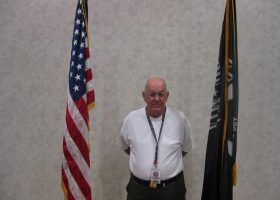 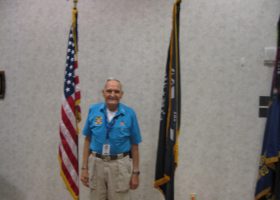 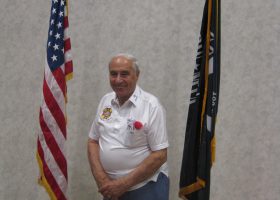 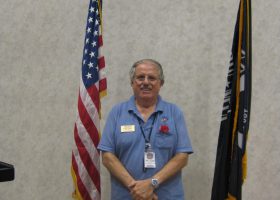 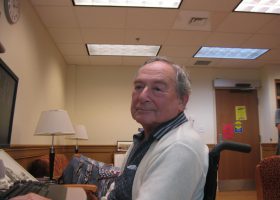 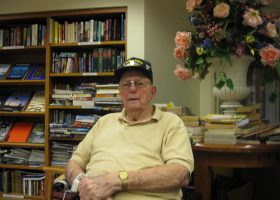 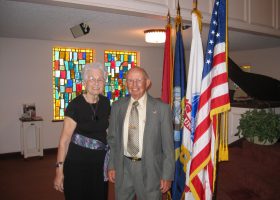 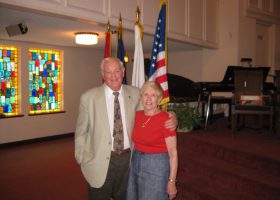 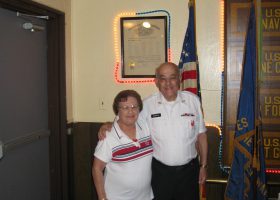 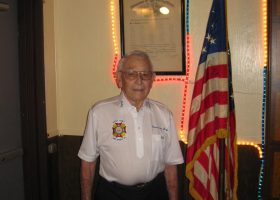 Interview with Purple Heart Veteran Louis Boria, Jr. at VFW Post 10147 in Apopka, FL May 19th, 2010. Veteran Louis Boria served as a Sergeant in the U. S. Marine Corps in World War II and the Korean War. He received two Purple Hearts for his service to his country. His four sons and his brother all became Marines. He lost one son in the Vietnam War. Veteran Boria reflects on his military experiences and the meaning of Memorial Day.

Interview with World War II Veteran James Ferguson at VFW Post 10147 in Apopka FL, May 19th, 2010. Veteran Ferguson joined the Navy in 1944. He went to aerial flight school, worked as a backseat gunner in WWII and later became a nuclear weapons technician working on the VC8, the first airplane equipped with nuclear capability. Veteran Ferguson reflects on his good life in Apopka and the meaning of Memorial Day.

Interview with WWII and Korean War Veteran William R. Meisel at VFW Post 10147 in Apopka, FL, May 19th, 2010. Veteran Meisel served in seven major battles throughout the Pacific and recalls some of his more memorable experiences. His grandson is currently on his fourth tour of duty in Afghanistan and is due to come home at the end of June 2010. Veteran Meisel shares his love for the military, his country and his community in this interview.

Interview with WWII Veteran Ortenzio A. Vecchio at VFW Post 10147 in Apopka, FL, May 19th 2010. Veteran Vecchio served with General Patton in the Third Army Division, Battalion 777. Ortenzio A. Vecchio was born in Italy and came to the U.S. at age 10. He refused to go to Italy during WWII because of his relatives and was sent to the white cliffs of Dover then to France and Germany. Veteran Vecchio shares his love for America and reflects on the meaning of Memorial Day: "saying prayers for those who fought and died for our country."

Interview with Vietnam Veteran Marv Suriff at VFW Post 10147 in Apopka, FL, May 19th, 2010. Veteran Suriff served in the U.S. Air Force in Thailand and Vietnam. His more memorable experiences include facing enemy fire from across the border and the great comradeship in the military. He reflects on the meaning of Memorial Day and the discipline he learned while serving his country.

Interview with WWII Veteran Walter Reinhold at the VA Medical Center in Orlando, FL May 26th, 2010.

Walter was born in Bavaria and sent to the U.S. at age 14 along with his brother. His parents stayed in Germany, but lost everything with "Kristallnacht". President Roosevelt's assistant later arranged for Walter Reinhold's parents to come to the United States.

Veteran Reinhold relates his experiences in the U.S. Army serving in the makeshift military government in Munich and his first driving lesson: when he was ordered to drive a vehicle across the Rhine river.

Interview with WWII Veteran Jacob Miller at the Orlando VA Medical Center on May 26th, 2010. Veteran Miller served in the U.S. Army in WWII, the Korean War and twice in the Vietnam War.  His military service as Master Sergeant included duty in Italy during WWII and working in the combat zone in Vietnam. He reflects on the education and advancements he received in the military, his love of family and his thankfulness for the Orlando VA Medical Center.

Interview with WWII Veteran Gerry Hosford at Delaney Street Baptist Church in Orlando, FL, May 30th, 2010, Memorial Day weekend. Veteran Hosford served as Staff Sergeant in the Army Air Corps during WWII working on aircraft such as B-10's and the Keystone Bomber. He recalls being on a date in a movie theater in Shreveprt, LA when the news broke out: "Pearl Harbor has been bombed. All military report to base." His date was surprised because he hadn't told her he was in the military. Mr. Hosford remembers Orlando as a small town when he came in the 1960s and today he says Orlando, "Is a wonderful place to be!"

Interview with WWII Veteran Rocco Covello at VFW 4287 in Orlando, FL, Memorial Day, 2010. Veteran Covello served in WWII in the 4th Infantry Division in Germany. He recalls waiting to go on the frontline at Camp Lucky Strike Replacement Camp when the war ended. Veteran Covello values serving his country and presently serves in the Honor Guard at VFW 4287. He enjoys the quiet of life in Orlando with his wife and two daughters.

Interview with WWII Veteran Robert Brodrick at VFW 4287 in Orlando, FL, Memorial Day 2010. Veteran Brodrick served in the U.S. Army as a Platoon Sergeant in Europe during WWII. He recalls in detail firsthand experiences liberating the first big town in France, Nancy, (The Battle of Nancy in 1944) and fighting in the Battle of the Bulge - Operation Market Basket. He shares his military experiences in Belgium, France, Holland, and Germany where he got hit with shrapnel on Dec.10th and was back on the frontline on Dec.16th. Veteran Brodrick is thankful "to all the buddies who sacrificed  their life to give me this freedom". He currently serves in the Honor Guard at VFW 4287.

Interview with WWII Veteran Jack W. Cropp at Delaney Street Baptist Church in Orlando, FL, May 30th, 2010, Memorial Day. Veteran Cropp served in the U.S. Army in WWII and the Korean War.  He was a Staff Sergeant. He shares his memories of seeing the Golden Gate Bridge when coming back to the U.S. from his tour of duty in the Pacific, the good experiences he had in the military and the good life he enjoys today in Orlando.


There are currently no video related to this memory.
Holocaust Memorial Resource & Education Center of Florida

The Holocaust Memorial Resource and Education Center of Florida is an organization dedicated to combating anti-Semitism, racism and prejudice with the ultimate goal of developing a moral and just community through its extensive outreach of educational and cultural programs. Using the lessons of the Holocaust as a tool, the Center teaches the principles of good citizenship to thousands of people of all ages, religions and backgrounds each year.

Our Center is one of the oldest facilities of its kind in the nation. It houses permanent and temporary exhibit space, archives, and a research library. It is a nonprofit organization supported by tax-exempt donations, and is open to the public free of charge.

The United States Holocaust Memorial Museum is America's national institution for the documentation, study, and interpretation of Holocaust history, and serves as this country's memorial to the millions of people murdered during the Holocaust.

The Holocaust was the state-sponsored, systematic persecution and annihilation of European Jewry by Nazi Germany and its collaborators between 1933 and 1945. Jews were the primary victims - six million were murdered; Gypsies, the handicapped and Poles were also targeted for destruction or decimation for racial, ethnic, or national reasons. Millions more, including homosexuals, Jehovah's Witnesses, Soviet prisoners of war and political dissidents, also suffered grievous oppression and death under Nazi tyranny.

The Museum's primary mission is to advance and disseminate knowledge about this unprecedented tragedy; to preserve the memory of those who suffered; and to encourage its visitors to reflect upon the moral and spiritual questions raised by the events of the Holocaust as well as their own responsibilities as citizens of a democracy.

Chartered by a unanimous Act of Congress in 1980 and located adjacent to the National Mall in Washington, DC, the Museum strives to broaden public understanding of the history of the Holocaust through multifaceted programs: exhibitions; research and publication; collecting and preserving material evidence, art and artifacts related to the Holocaust; annual Holocaust commemorations known as Days of Remembrance; distribution of education materials and teacher resources; and a variety of public programming designed to enhance understanding of the Holocaust and related issues, including those of contemporary significance.

The Holocaust Collection at the Jacksonville Public Library. Unique resources in the collection include the Shoah testimonies.

Yad Vashem, established in 1953, is the Holocaust Martyrs' and Heroes' Remembrance Authority. The words mean "a monument and a name" in Hebrew.

The organization has been working with others to document the approximately six million Jews killed during the Holocaust. So far, they've created a database of nearly three million victims.

This site gives you access to this searchable database. You can search by name, location, birthplace and other variables.

The Jewish Foundation for the Righteous
https://jfr.org/about/

Interview with Veteran Stephen Sterner at VFW 10147 in Apopka, FL, May 19th, 2010. Veteran Sterner graduated from the U.S. Naval Academy and retired from the U.S. Navy in 1982. He visits the VA Hospital once a week, volunteers at the VFW and here displays commerative poppies sold to support those wounded in service for our country.