If you’ve lived in Orlando any number of years, you’ve heard the rumor that the evil idiopathic serial killer Ted Bundy who was tried in Orlando in 1980, carved his name into the defendants table in courtroom B, now part of the Orange County History Center.

When found during renovation, the history center covered the signature in Plexiglas on the off chance that it was real.

The courtroom, table and signature is still there but it is likely the product of some other defendant being tried in that courtroom long after Bundy was tried in the Annex and transported to prison.

Having been in he courtroom and seen the table, I don’t think its real. Not because I am positive that he did not do it, but because I truly feel I’d get a sense of evil in that place if he had been in the building.

Here are a few photos – you decide. 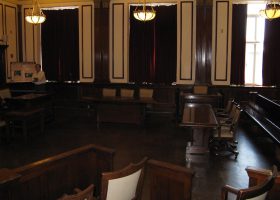 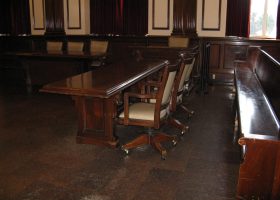 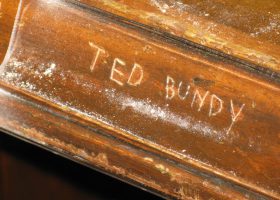 Ted Bundy and Courtroom B
Local legend says that Ted Bundy carved his name into the right corner of the defendant's table in the old Courtroom B...
There are currently no audio related to this memory.
TEST