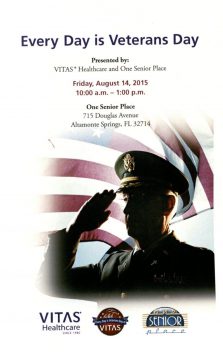 One Senior Place and VITAS Healthcare presented their annual tribute to veterans, “Every Day Is Veterans Day,” on Friday, August 14, 2015 at the Altamonte Springs location.

Veterans of all ages, but especially seniors, were honored for their service and treated to a program that included the playing of Reveille, beautiful renditions of patriotic songs by the Orlando All-American Singers from the Orlando Chapter Daughters of the American Revolution (D.A.R.), inspiring poetry by Pernell Bush, and Invocation and Benediction by Chaplain Dick Sauer, USN, retired.

The keynote speaker was Marine Corps veteran and NASA Astronaut, Colonel Robert C. Springer, whose “down to earth” and friendly demeaner instantly endeared him to all present.

Representatives from organizations, including the Orange County Library System, American Legion, provided information on the services they provide of interest to veterans. One exhibit stood out from the rest – a father promoting a Scholarship in the memory of Tara Jacobs Brown – his daughter who was killed in Afghanistan. 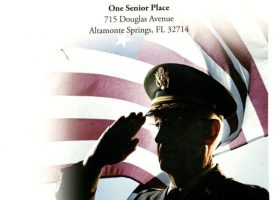 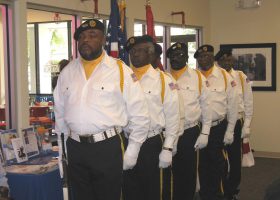 American Legion Post 331 - Every Day Is Veterans Day
Preparing for Presentation of Colors, members of the American Legion Dorrie Miller Memorial Post 331 are shown at One Senior Place in Altamonte... 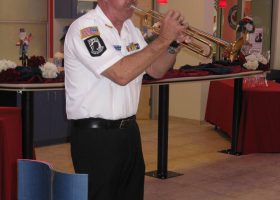 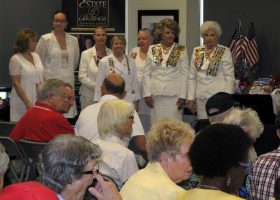 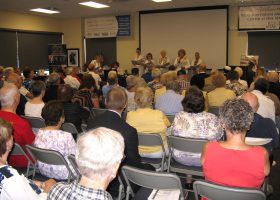 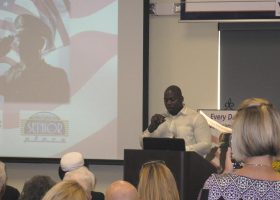 Every Day is Verterans Day - Pernell Bush
The "Everyday is Veterans's Day" event presented by One Senior Place and VITAS Healthcare in Altmonte Springs on August 14, 2015 also... 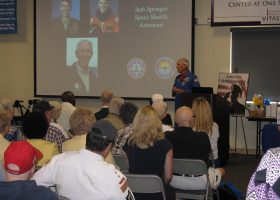 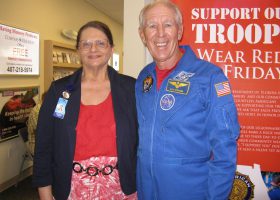 Astronaut Robert Springer - Every Day Is Veterans Day
Colonel Robert C. Springer, retired Marine and former Astronaut of Shuttle missions STS-29 and STS-38, was the guest speaker at the "Everyday... 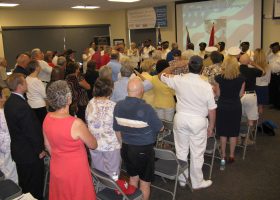 Program of events for "Every Day Is Veterans Day" presented by VITAS Healthcare and One Senior Place on Friday, August 14, 2015 in Altamonte Springs.

On April 18, 2106, a street was named in memory of Master Sergeant Tara R. Jacobs Brown who lost her life in Afghanistan. U. S. Congressman John Mica was present for the street dedication and ribbon cutting ceremony in Deltona, Florida, near her alma mater Deltona High School.

Tara Jacobs Brown Scholarship Foundation was created by her father in her memory. Read more about the foundation and Tara at TJBSF.org.

Master Sergeant Tara J. Brown was born July 21, 1977, and graduated from Deltona High School in 1995. She enlisted in the Delayed Entry Program in August, 1995, and reported to Basic Training at Lackland Air Force Base, Texas, in February, 1996.

Upon completion of basic training and technical training at Keesler Air Force Base Mississippi, she was assigned to Kadena Air Base, Japan, where she began working in the administrative career field. Numerous overseas assignments followed along with several deployments. She was assigned to Headquarters Air Force Office of Special Investigations in November, 2006.

Brown served in the Directorate of Operations and in the Global Watch before being assigned on June 1, 2010 to the Air Force Office of Special Investigation. Brown deployed to Detachment 243, Eskan Village, Kingdom of Saudi Arabia and to Expeditionary Detachment 2413, Kandahar Airfield, Afghanistan.

In January, 2011, Brown deployed to Kabul, Afghanistan, as a Communication Squadron Advisor for NATO Air Training Command, Afghanistan. In this role, she served as an international trainer on the basic fundamentals on desktop computers and computer networking to Afghan Air Force technicians.