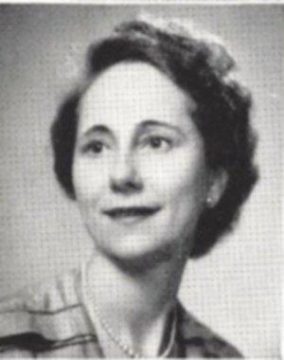 She took a year’s leave in September 1945 to earn a Master of Arts in Library Science at the University of Chicago. During her absence Miss Miriam E. Bass was Acting Librarian.

Miss Wendel served for 27 years and saw the staff grown from ten, all of whom could be listed in annual reports, to a troop of 150, all dedicated to giving the most personalized service possible. Miss Wendel retired on November 1, 1970 and Glenn F. Miller became only the third director of the library in its first five decades.

After leaving the library, Clara became a member of the Third Friday Book Club – the longest existing club in Orlando, having been founded in 1942 and still active today. The membership rosters show that Clara became a member in 1970 and was last listed in 1992. The club members “Sent $130 to Orlando Public Library in memory of Clara Wendel” who died in December 1995 in illinois at the age of 94.

Her obituary was published in the Orlando Sentinel on Secember 24, 1995, page B5, Local and State.

Wendel served as head librarian in Orlando for 28 years. When she retired in 1970, Mayor Carl T. Langford proclaimed a Clara Wendel Day in her honor.

Wendel was born in Harvey and moved to Florida with her parents in 1916. She graduated from Rollins College, attended Florida State College for Women (now FSU) and received her master’s in library science at University of Chicago.

When Wendel started her career with the Orlando library, it was housed in a 20-year-old, cramped building with 10 employees. In 1966, Wendel oversaw the move to the current library building in downtown Orlando. By the time she left, Wendel had 120 full-time staff members, 10 library branches and two traveling bookmobiles.

Wendel is survived by three nephews. Funeral services will be held at 10 a.m. Friday at the Cathedral Church of St. Luke in Orlando.

Peruse the DOCUMENTS and IMAGES pertaining to Clara Wendel.