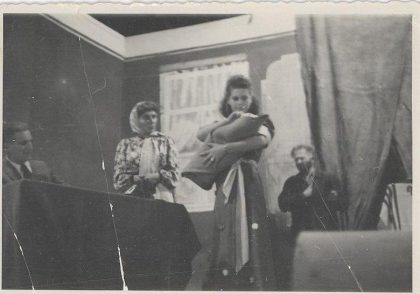 Photos of Holocaust survivor Helen Garfinkel performing on stage at Displacement Camp (DP) in Ainring, Germany. Ms. Garfinkel was liberated from Allach concentration camp on April 29th, 1945 by the United States Military. After recuperating in a hospital for three months,  Ms. Garfinkel was transferred to DP Camp until 1949. 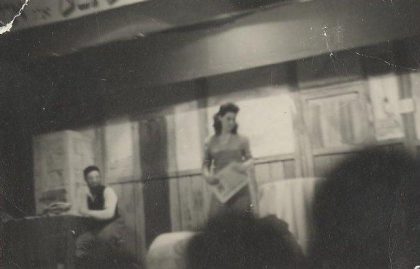 She joined the Theater Troupe and her performances  earned her chocolate and cigarettes useful for bartering for  needed goods.

While at DP Camp she met Joe Greenspun, a Holocaust survivior from the Ukraine.  Helen Garfinkel Greenspun says “Hitler was their matchmaker” as the couple  later reconnected in the United States and were married in Detroit in 1951.

Mr. and Mrs. Greenspun moved to Orlando in 1973  with their daughters, Pauline and Rita.

Mrs. Greenspun has been volunteering with the Holocaust Memorial and Education Center of Florida since 1981. Orlando Magazine recognized her as a “Good Neighbor Who Gives From the Heart” for her contribution to the Orlando community. 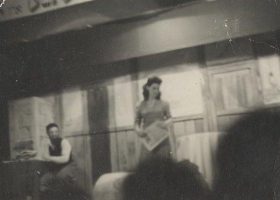