From Biographical Sketches of some of the people who worked for the law firms started in 1908 by LeRoy B. Giles (Florida collection at the Orlando Public Library FLORIDA 975.924 ROB).

Jim Robinson was born in Rock Hill, South Carolina and became an Orlando citizen when his father brought his family to Florida in 1926.

Jim attended Hillcrest Elementary School for the first two years and was in the class with a cute little blonde named betty Thornton, who made no impression on him — then. The family moved to Conway and Jim went to Delaney school, Cherokee Junior High School and Orlando High School. Before his senior year at Orlando High School, that blonde popped up again and they were sweethearts, both chosen by the class as most likely to succeed.

After graduation in 1940, Betty went to Florida State College for Women and Jim headed for University of Florida . . . . Jim was a private first class in the Army when he and Betty were married at the First Presbyterian Church of Orlando . . . . Jim served as an officer in France and Germany in World War II.

Jim returned to the University of Florida to finish his law degree [and] returned to Orlando where Jim went to work in LeRoy Giles’ office and joined Mr. Giles in a partnership in 1953 under the name of “Giles, Hedrick & Robinson.” The firm operated under this name from 1953 to 1992 when it became “Giles & Robinson.”

Jim was active in politics in the Democratic Party and ran for Congress in 1968. . . . While he served as County Attorney, he was instrumental in the removal of segregated facilities in the Orange County Courthouse.

Jim Robinson were recognized for their many contributions to the greater Orlando community in this article published in the October, 2013 issue of Pine Castle Women’s Club newsletter. Betty is a second generation Orlandoan and they both graduated from Orlando High School in 1940. 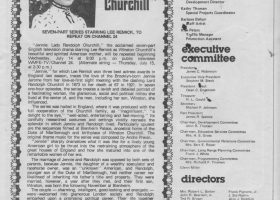 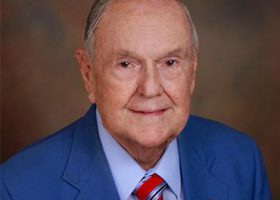 Betty and Jim Robinson were recognized for their many contributions to the greater Orlando community in this article published in the October, 2013 issue of Pine Castle Women's Club newsletter.  Betty is a second generation Orlandoan and they both graduated from Orlando High School in 1940.