ORLANDO MAN DISAPPEARS. This May be a Case of Self Destruction. JEROME PALMER WANDERS AWAY.  Sanford Herald, front page, March 28, 1913, p. 1, col. 5

Jerome Palmer, an old resident and business man of Orlando, is missing and circumstances all point to the theory that he has taken his own life. He has been suffering from severe nervous trouble for several months and has been an inmate of Dr. McEwen’s sanitarium. He has been somewhat better and has been allowed to go out riding and yesterday morning he went for a horseback ride on his own favorite saddle horse. Not returning in a reasonable time, three of his friends, A. G. Brenham, Clark Robertson, and Charles Lartigue, started out to find him. They finally located his horse grazing on the shores of Lake Holden, just southwest of the city limits. A thorough search of the lake shores and all the region about the lake has failed to find any of his belongings and the theory is that he has taken his own life, either by drowning or s hooting himself, as it is known that he has made several attempts to borrow a revolver within the past few days. He was unmarried and has been a successful business man and the only possible theory is that he took his own life while out of his mind. A thorough search will be continued in the morning to ascertain where he is, if alive, and locate the body, if the suicide theory is true.

LATER: –The body was found in Lake Milton last night. 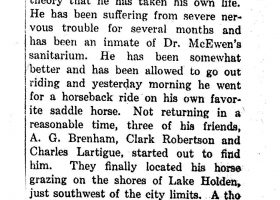