The Enyart Field House at Rollins College in Winter Park is no more. It was totally remodeled, enlarged and renamed in 2001. The Rollins College archives describes the its history complete with photographs. Here is an excerpt:

“During the late 1950s, Rollins saw an increasing demand for a new field house to meet the need of a large student population on campus. In 1961, the school received the first donation towards such a facility in memory of Arthur Delano Enyart (’49H), a well respected and beloved Dean of Men at Rollins from 1931 to 1950, who just past away. Six years later when all funding was secured, a groundbreaking ceremony was held on March 18, 1967. Completed a year later, the 37,000-square foot building contained a basketball court seating 2,500, and classrooms as well as offices for the Physical Education Department. The first basketball game to be played in the new field house was against Stetson, and Rollins won 77-72. For over the next three decades, the Enyart Filed Alumni Field House served as the preferred place for large events on campus. Finally in 2001, when the school received a large donation from Harold and Ted Alfond, the field house was extensively renovated, enlarged and renamed after the Alfond family.”

The events included rock and roll concerts by greats like Harry Chapin and Billy Preston who performed there in the early 1970s. The field house, due to its compact size, offered seating that delivered a more personal setting than concert halls, arena’s or stadiums. You didn’t need binoculars or big screens (non-existent at the time) to see the performers. Darla Moore from Rollins College was able to pinpoint the actual date of the Billy Preston concert. The Tarpaper newsletter issue for Feb. 11, 1974, reported that Billy Preston was scheduled to appear in concert “on Saturday night (February 16) at 8:30 in the College fieldhouse.”

There were many concerts at the Enyart Field House but the two above were my favorites. This program from the Billy Preston concert now resides in the Rock and Roll Hall of Fame in Cleveland – “where the heart of rock ‘n’ roll is still beating!” You don’t have to go there to see it though – you can peruse it here. 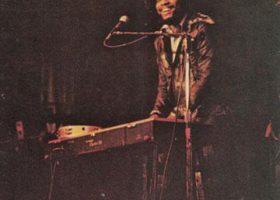