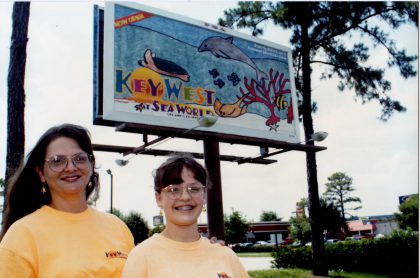 Ashley and her family were given a trip to Key West and she also received a full size billboard (which she still stores under her bed).

LAKE MARY – Ashley Peters is only 11 years old, but she’s about to become one of Central Florida’s most visible artists.

Artwork by the Greenwood Lakes Middle School seventh grader was selected for display on 55 billboards advertising the new Key West attraction at Sea World of Florida.

Two earlier trips to the Florida Keys made Ashley a perfect candidate to enter the contest, although she never thought she would win.

“My brother has always been the artist in the family,” Ashley said. “But my mom thought I could do it.”

Ashley drew on her experiences in the Keys to create a colorful picture, which features dolphins, stingrays, coral and the water of the islands.

“Her picture encompassed all the things that Key West has,” said Jeff Cargill of Sea World. It was obviously done very nicely, and the judges thought it would adapt well to a billboard.”

About 150 Central Florida third through sixth-graders submitted drawings for a chance at fame and prizes.

As the first-place winner, Ashley won a family trip to Key West, a class trip to Sea World, tickets to the opening of Key West at Sea World and a chance to see her artwork along some of Central Florida’s busiest highways.

“Driving by a billboard with my picture on it is weird,” said Ashley, a straight A student, gymnast and pianist. “It’s just so neat to see it.”

Ashley’s billboard, created by POA Outdoor Advertising, will be used for about a month to advertise Key West of Sea World.